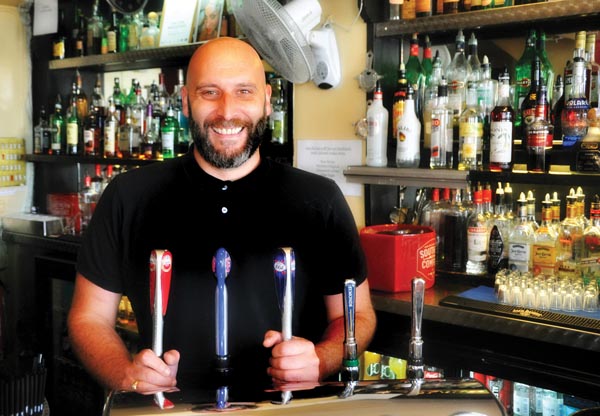 Charles Child will be packing his bags and leaving Doctor Brightons and Brighton for the last time on Saturday, November 3.

CHARLES and his staff were originally due to leave Doctor Brightons in July after his landlords, Enterprise Inns decided they did not want to renew the lease for the building they had with Brighton and Hove City Council for the premises at 16-17 Kings Rd, Brighton.
Even though Charles was a tenant in situ the council informed him that a new lease had to go out to competitive tender and Charles was told that even though he had been the tenant for the previous 12 years, he would have to bid along with other businesses including national corporate brands
Charles thought the process unfair and stacked against any small businessman, so he decided not to bid. He announced a closing party for July 14 but after his customers in no uncertain terms made their feelings known to him about his decision to close, he decided to lodge a bid for the new lease.
His bid was accepted, with the council promising him a fifteen year lease. Then followed a period of silence from the council and Enterprise Inns, during which nothing happened, leaving Charles in no mans land trying to run a business without having the terms of his lease agreed.
In reality the Council and Enterprise Inns wanted him to pay for the repairs to the building, which was the responsibility of the brewery who held the main lease. Charles like many other business people in the city decided he did not want to risk his future working with a local authority that made life difficult for small business people like him and withdrew his bid.
His last night behind the bar at Doctor Brightons will be on November 3. Between 7-9pm he is inviting, for a private VIP reception, a small group of long-standing regulars, friends, current and old employees and people who he feels have made a difference and helped him during his years in Brighton. Then, from 9pm, he will throw open the doors of Doctor Brightons for the very last time for everybody to have one big final party.
It will cost £3 to get in with which he will buy you a drink and donate the proceeds to the Rainbow Fund an organisation who give grants to local LGBT/HIV organisations that deliver effective front line services to LGBT+ people in the city.

Charles says: “I want to thank all the customers who have supported me over the last 10 years in my own beloved Doctor Brightons and other venues and also my brilliant staff team from bar staff to security to DJs.
I would have loved to be the one taking Doctor Brightons forward over the next 15 years but the council have made that impossible.
“I look forward to seeing and celebrating with everybody on November 3 for our final curtain call at the bar and raising some much-needed money for the Rainbow Fund, an organisation I believe in so much for one last time”