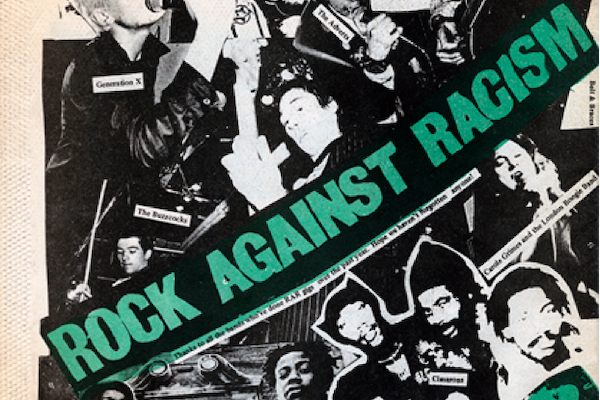 The De La Warr Pavilion in Bexhill-on-Sea is to host a major new exhibition from Saturday, December 12, 2020 to Sunday, May 9, 2021 to celebrate Rock Against Racism (RAR), featuring a new commission by artist Larry Achiampong created in response to the sounds, visuals and ethos of RAR, and contributions from Bass Culture.

RAR (1976-82) was one of the most important British grassroots cultural movements of the 20th century. Uniting music lovers to fight against racism and fascism, it harnessed the power of the imagination – thrilling music, vibrant design and witty, subversive polemic – along with a DIY ethos which expected everyone to do their own thing as well as being part of a huge collective effort. Hundreds of small local bands played RAR clubs and gigs, as well as big names like Aswad, The Au Pairs, Buzzcocks, The Clash, Misty in Roots, The Specials, Gang of Four, Steel Pulse, Tom Robinson Band and X-Ray Spex. The result was a movement which raised the consciousness of a generation.

Rock Against Racism: Militant Entertainment 1976-82 will capture the excitement of the moment and the thirst for change, setting RAR’s activities within the social and political context of the time. It will showcase the punky RAR aesthetic through posters, photography, badges, stickers, leaflets, letters from young fans across the world, as well as striking graphics from the legendary RAR fanzine, Temporary Hoarding.

The exhibition will include documentation of the movement from photographers including Henry Grant, Red Saunders, Virginia Turbett and Val Wilmer, and material about associated campaigns including the Anti-Nazi League, Rock Against Sexism, Asian Youth and Gay Rights movements. Bass Culture will present filmed interviews from key figures including musicians and activists, commenting on their experiences of the time, and the importance of RAR. Visitors are invited to record their own memories and draw parallels to collective movements today. A programme of learning, participation and live events will accompany the show.

Larry Achiampong will present two newly commissioned works: a sound piece heard within the exhibition, featuring the voice of Ghanaian author Ama Ata Aidoo speaking powerfully about colonialism and racial injustice, and a flag, What I Hear I Keep, to fly from the Pavilion’s flagpole. Both works form part of the artist’s on-going, multi-site project Relic Traveller, which addresses issues around migration, displacement and nationhood through sound, film, performance and objects. Combining material that includes lost testimonies, pop-culture and stories of fallen empire, Relic Traveller methodically traces an Afro-centric narrative for the future, built on the dismantling of colonialism.

Achiampong says: “I’m very excited to be making new artworks that consider important histories which are often forgotten or erased. This is an appropriate moment to ponder the symbolic imperatives of Sound and Music, not just from a Diaspora-based perspective, but also, the rooted relationship with the African continent.”