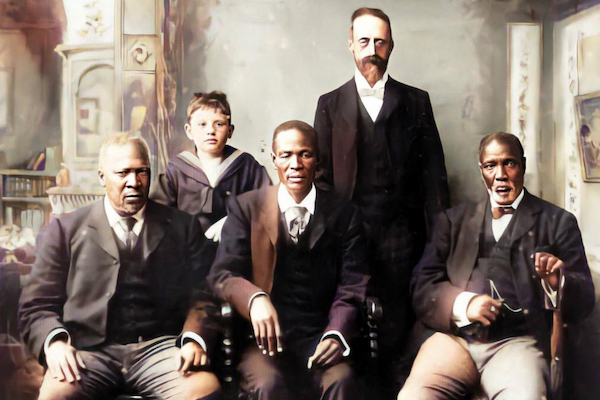 A local community group is creating new school resources for primary and secondary schools focusing on the story of the Three Kings of Botswana and their visit to Brighton and Sussex in 1895.

Brighton & Hove Black History has been commissioned by the University of Sussex to produce the resources, a short educational film and schools resources, which will be launched at an online event in September 2021.

Brighton & Hove Black History is a Brighton community group whose aim is to challenge racism and prejudice by raising awareness of the multicultural history in Sussex and the UK, established in 2002.

A largely untold story from Brighton’s diverse past, the three kings of Bechuanaland (now called Botswana) came to the UK to urge the British Government to stop Cape Colony Prime Minister Cecil Rhodes and his company the British South Africa Company from taking ownership of their country. Rhodes was a well known racist and brutal employer. He also wanted to build a railway across Bechuanaland linking the Cape to Cairo and to giving all the land 20 miles either side of the railway line to White farmers. The kings took control of the situation and commissioned a local Brighton man, Charles Willoughby, to organise a tour of Britain for them.

They visited Brighton and Sussex as part of their visit to the UK, including visits to Elm Grove Primary School, Brighton Museum and Union Church on Ship Street.

The project will create online downloadable schools resources for Key Stages 1, 2 ,3 and a short film aimed at secondary school children.

The aim of the project is to combat racism in schools by providing much needed, high quality resources for teaching Black History and histories of the Empire with a thrilling local angle for schools in Brighton & Hove and Sussex.

These resources will help schools teach citizenship, history and other parts of the curriculum, as well give local students a rooted connection to Brighton’s history of multicultural diversity during Black History Month.

JoAnn McGregor, Professor of Human Geography, School of Global Studies at University of Sussex, says: “I am excited by this collaboration with Brighton & Hove Black History — the project will bring the story of the three African kings’ visit to Britain into classrooms, enabling our schools to teach about Empire and providing new Black History resources that are locally relevant. Brighton & Hove Black History have great skill in bringing historical stories to life, as they have done before with the Thomas Highflyer project. We hope this leads on to other projects.”

Suchi Chatterjee, lead historian at Brighton & Hove Black History, added: “I am so proud to be part of this amazing research. It proves what my friend Bert Williams MBE has been saying for years, that Brighton’s diverse history runs deep and long. The Three Kings visit to Brighton in 1895 is just one of many secret histories that we are uncovering in Sussex where people of the diaspora are making their presence felt after so many years hidden away.”