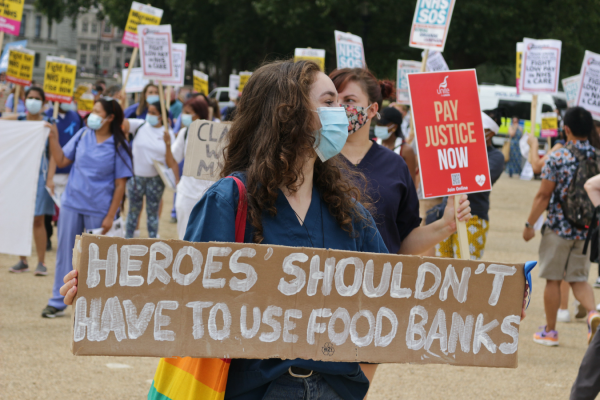 This article has been written by Peter Markham who works as a correspondent for the Immigration Advice Service, an organisation of Manchester immigration lawyers

There are around 23,000 people in Brighton & Hove who provide unpaid care for a friend or family member. Today, the true number of carers in the UK is rising, and is estimated to stand at around seven million.

Carers deserve appreciation because of the huge sacrifices they make in their own lives. Many are still at school and have to make compromises about their own education and job prospects in order to look after parents or other loved ones.

The financial contribution they make in the UK is thought to be getting on for £120 billion per year. Although they have set the bar high when it comes to the best in humanity, many carers are arguably often forced to take on roles that should be the responsibility of the state.

The UK appears to be taking on the identity of a ‘Justgiving’ nation. It’s not only carers who are left to plug holes left unfilled by the government. A pattern has emerged whereby injustices and inequalities are flagged up only for the government to reject them before doing an ‘about-turn’ when the pressure from the public becomes too great to ignore.

The debacle over school meals is a great example of this. At first, the government dismissed the demand by Man’ United star, Marcus Rashford, to continue offering free lunches during the holidays. By the end of October, his petition to put an end to child poverty had reached over one million.

But it wasn’t just signatures that made up the response to Marcus Rashford’s call to level up the playing field when it comes to keeping children well nourished. Restaurants and cafés stepped up to the plate and came to the rescue of families struggling to feed their kids during the autumn half-term. Even McDonalds jumped in with the donation of a million free meals to be served up to poorer families.

This outpouring of kindness made the government’s position seem even more miserly, particularly as it was simultaneously promising extra billions on defence spending.

And so there was yet another U-turn. The government said it would give over £400m to support poor children and their families in England. This included a £16m cash injection for the nation’s food banks.

Despite being forced to cave in when caught out by public generosity, the government is made up of ministers who are keen to trample over decent people who get in the way of their agenda. The Home Secretary, Priti Patel, recently sneered at some she referred to as ‘do-gooders’ and ‘lefty lawyers.’

These are people who are trying their hardest to legitimately protect asylum seekers, some of the most vulnerable members of society. And, yet Ms Patel attacked them, claiming they were united with people-traffickers in a desire to stop reform of the country’s ‘broken’ asylum system.

Her remarks were supported by the Prime Minister but were met with contempt by a host of  respected politicians, judges and lawyers who demanded both apologise.

It was at this point that a Cabinet Office inquiry made a damning indictment against the Home Secretary. “Her approach on occasions has amounted to behaviour that can be described as bullying in terms of the impact felt by individuals,” it said.

It’s also worth noting that five times more asylum seekers have died in UK detention centres this year than by crossing the English channel. It’s a sobering statistic and makes one wonder how safe these people, who have no voice, really are once they reach our shores and are taken into ‘the care’ of the authorities.

Captain Tom Moore, the hundred-year-old World War TWO veteran, managed to raise over £30 million to help NHS Charities Together during the COVID-19 pandemic. His remarkable achievement stands in sharp contrast to an array of other actions taken by the government which it has then had to backtrack on.

These include the stance it took over foreign migrant health workers and an NHS surcharge. After a backlash from MPs, Boris Johnson suddenly announced that these highly valuable workers would no longer be required to pay the extra fee. Even Tory peers and some of his own MPs argued that the initial policy had been “mean-spirited and immoral.”

The country has had to endure a series of U-turns and fiascos from the algorithms used in A’ level results to the confusion over paid parking for hospital workers.

It feels that there is news about more cuts to care levels whenever you open the newspapers.

200,000 older people who were getting social care before the pandemic now say they’ve had their support cut back or stopped altogether, according to Age UK.

The charity Mencap says almost 9 out of 10 people with a learning disability have had their care packages withdrawn during the pandemic. That means three quarters of family carers say they’ve had no choice other than to increase the level of care they offer themselves. Many are at breaking point.

And what do you have but a government which is prepared to say that the Coronavirus Act has actually been improving access to care. At the same time, it appears more than happy to dish out honours to those who have drawn attention to its own failures.

The UK may be one of the world’s most charitable nations. There is a real risk that public kindness is not only being taken for granted, but also that high profile individuals feel they have no other option other than to pressurise reluctant politicians into paying for services that the state should have been providing in the first place.