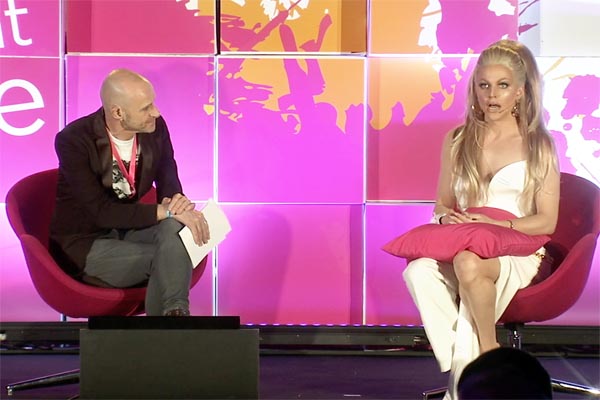 Drag queen legend and winner of Celebrity Big Brother Courtney Act tells Evan Davis about her relationship with Andrew Brady – and why his self-confidence is something we should all aspire to have.

Courtney told attendees at National Student Pride in London yesterday, that coming out as genderqueer freed her.

Speaking on the #QueerAF live podcast with renowned BBC Newsnight presenter Evan Davis, Courtney Act spoke about how realising she was genderqueer freed her from her anxieties of not being masculine enough.

She also discussed being careful about her relationship with Andrew Brady “as it could ruin his career.”

Living beyond the binary is important to Courtney. The Celebrity Big Brother (CBB) UK winner and the season 6 Drag Race star spoke about the defining moment that changed how she saw gender and sexual identity.

“When I realized my femininity was important and could be celebrated, it laid to rest a lifelong struggle with my gender.”

She also spoke about people in the house criticising her and Andrew.

While the LGBT+ viewers of the Channel 5 program fell in love with the friendship that grew between the two unlikely housemates during their time together in the CBB house – many of her housemates warned her of her actions and told her to stop manipulating her fellow housemate as it could be departmental to his career.

“They told me to be careful as I knew what I was doing and that Andrew didn’t and that what we were doing could have a bad effect on his career.”

Courtney Act, on the other hand, turned the situation into a lesson everyone in the house didn’t know they needed.

Unlike her housemates, including the homophobic former MP Ann Widdecombe, Courtney told the students that he fact Andrew Brady feeling comfortable and confident in himself to be able to express how he felt – is something to celebrate.

“But what I think is more important Andrew acting on his feelings and feeling like he was able to do that.”

National Student Pride, took place in London at the University of Westminster’s Marylebone campus. The main daytime festival on Saturday, February 10, had panels, performances and a careers fair with over 1700 LGBT+ students from across the UK taking part in the weekend of festivities from Friday 9 to Sunday February 11. The evening entertainment was hosted by the infamous G-A-Y night clubs, culminating with a party at G-A-Y Heaven.