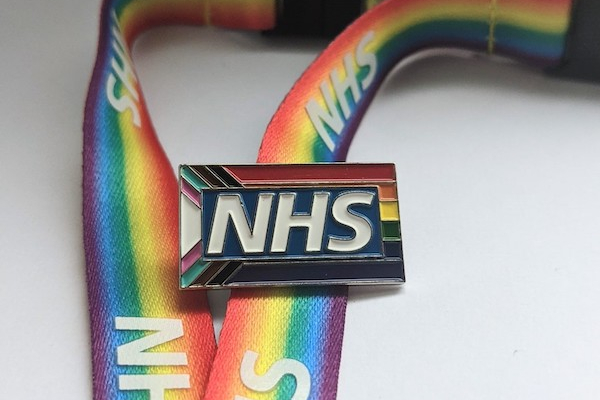 Pin badges with a progressive and inclusive LGBTQ+ flag will appear across Central and North West London NHS Foundation Trust (CNWL) from February as staff and volunteers show their support for LGBTQ+ patients, carers, visitors and colleagues.

In February 2015, CNWL became the first NHS Trust to launch rainbow-coloured NHS lanyards to support LGBTQ+ staff and allies at work but now feels the time is right to relaunch the Trust’s flag with a greater emphasis on inclusion and progression.

Shamal Waraich, CNWL’s Pride@CNWL Staff Network Diversity Lead and Senior Peer Support Worker in the Trust’s Sexual Health Service, said “We want to lead the way in the NHS and embrace a fully progressive rainbow. Identities that display LGBT+ inclusion will help us keep progress moving forward in the communities we operate.

“We want to encourage equality, inclusivity and diversity across the Trust which includes coming up with initiatives that help staff and patients feel recognised and supported, regardless of their identity.”

The Progress Pride Rainbow Flag, created by Portland designer Daniel Quasar, adds five arrow-shaped lines to the six-coloured rainbow flag, which is widely recognised as the symbol of LGBTQ+ communities. The flag includes black and brown stripes to represent marginalised LGBTQ+ communities of colour and those living with AIDS, along with pink, light blue and white, which are used on the Trans Pride flag.

Claire Murdoch, CNWL’s Chief Executive, said “I’m a huge supporter of the new Pride@CNWL progress badge; I ask that everyone brings their whole self to CNWL, it’s good for patient care.

“Our rainbow lanyard scheme helps create an open dialogue and inclusive atmosphere at work and in our services. If patients feel safe to open up about their sexual orientation and gender identity then that leads to better care and a better working environment; that’s better for everyone.

“These badges advertise our intentions; we’re a diverse Trust and we celebrate diversity in all forms to welcome everyone – to make all our staff and patients feel supported regardless of ethnicity or orientation.”