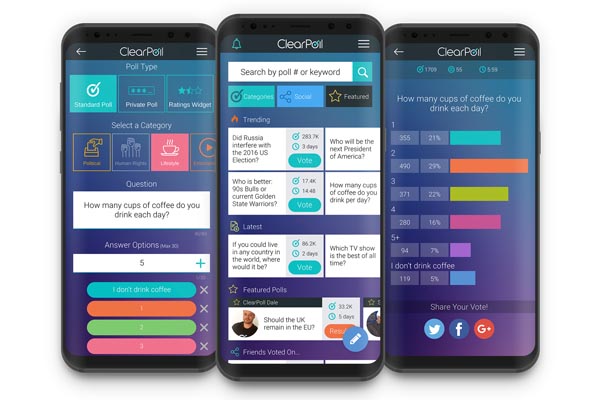 BLOCKCHAIN is the technology that underpins digital currency, such as Bitcoin. The information on the blockchain is constantly reconciled into the database, which is stored in multiple locations and updated instantly which means the records are public and verifiable.

Since there’s no central location, it’s harder to hack since the data exists simultaneously in many places.

Blockchain technology was invented in 2008, but only came into the public conversation when Bitcoin launched the following year.

Bitcoin & Cryptocurrency
Bitcoin and other cryptocurrencies are digital and global money system currencies on the blockchain. It allows people to send or receive money across the internet, even to someone they don’t know or don’t trust. Small businesses are now using the blockchain to create secure projects with their own payment currencies integrated into their projects. These coins, or tokens, are also bought within the crypto community as an investment.

Introduction to ClearPoll – A Social Public Opinion Poll Network on the Blockchain
ClearPoll is a social public opinion poll network, using blockchain technology to secure votes and poll results. ClearPoll also uses blockchain for its very own cryptocurrency coin, the ‘POLL Token’ for payment of its services. The decentralised ClearPoll polls are not censored and cannot be manipulated or deleted.

In recent times, the media, private organisations, and even governments have manipulated or censored true public opinion, to suit their agenda. The main problem is the centralisation of public opinion poll data. Controlling the polls allows them to use it to their advantage, and does not give an accurate picture of what people really want. ClearPoll solves these problems.

As a user of ClearPoll, you don’t need to know anything about blockchain or crypto. It’s a fun way to create and vote on secure polls. You can very simply sign up to search for topics that are important to you. You can then view poll results and easily share the polls and results on social media.

ClearPoll aims to be the place to go, to have your say. A hub of accurate, current public opinion across a wide range of topics including politics, human rights, entertainment, sports, just for fun and more.

ClearPoll is for everyone. Vote on anything from fun topics, to more serious issues. ClearPoll is available from the Apple Store, Google play Store or by using the online platform at clearpoll.com