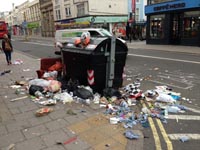 Four days into the CityClean strike, residents and traders are taking matters into their own hands as the city centre is slowly buried under piles of rubbish.

“What happened to the ‘greener, cleaner city’ we were promised? The state of the city is terrible and this will lead to an increase in crime and vandalism, not to mention a downturn in tourism and business. When we were in the council, these issues were our top priority.

“Councillors should stop arguing amongst themselves and stop picking on the low paid workers and sort this out now.”

In a separate development The Tourism Alliance have asked their members to help keep the streets and beach clean around their venues.

Management from the Sea Life Centre and Brighton Pier are organising a daily beach clean every morning. As well as ensuring the beach is presentable for visitors and residents, they are also concerned of the environmental impact of large volumes of waste on marine life.