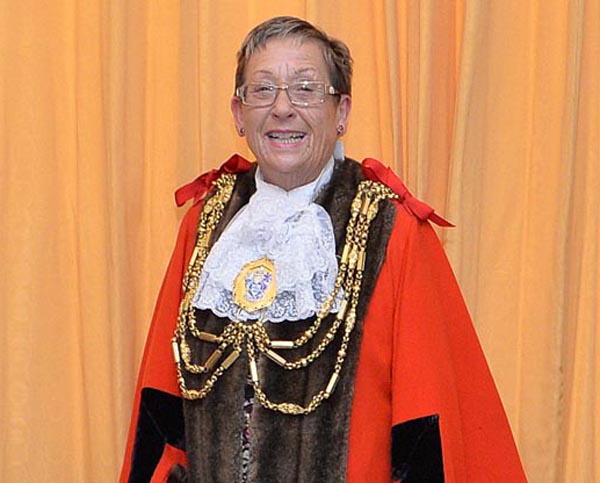 Councillor Mo Marsh was appointed Mayor of the City of Brighton & Hove at a meeting of the full council on May 18.

She replaces the present Mayor Cllr Pete West and will serve the city for the next 12 months. Cllr Marsh has been a Labour councillor since 1995, balancing her civic life representing the residents of Moulsecoomb and Bevendean with her family life, spending time with her daughter and grandchildren while indulging her love of the arts and culture.

Born in Leicester, she left the city in 1965 to study at the University of Sussex for a BA and Postgraduate Certificate in Education (PGCE). In Brighton, she met and married the father of her daughter, who was raised and educated in the city.

Cllr Marsh enjoyed a busy professional career in education, working at different times as a teacher, school governor, administrator and examiner. She spent a year in Michigan, USA studying for an MA and went on to earn diplomas in teaching English as a foreign language, counselling and career guidance at the University of Brighton.

Cllr Marsh who is celebrating her 70th year in 2017 will be raising money for five charities during her year in office, Albion in the Community, The Marlets Hospice, RISE, The Clock Sanctuary and The Sussex Heart Charity.

In her first speech to full council, Cllr Marsh said:  “My Lord Lieutenant, fellow Councillors, ladies and gentlemen … special guests … for a small person, this is a big moment, in fact you might say it’s my Mo-ment.

To be made Mayor of a city I’ve loved since I first set foot here is a genuine privilege … and something I’m going to cherish. Our communities give our city its’ distinct and unique personality; and it’s to them that I will dedicate my time and energy.

I’m always amazed … and often surprised … by the diversity of peoples that make Brighton and Hove what it is … a vibrant, complex, contrary, fascinating and beautiful place.

I hope to put the ‘Mo’ in mobilise and help galvanise the goodwill, creativity and compassion that our communities provide. I’ll be paying particular attention to the five charities that I have chosen to support this year; Albion in the Community, the Martlets Hospice, RISE, the Clock Tower Sanctuary and the Sussex Heart Charity. These are organisations that give support too and gain support from the people of Brighton & Hove and my hope is that there will be reciprocity and mutual gain between our communities and charities.

As a city, we need more than ever, to harness the goodwill and generosity of our residents; there is no doubt that the hard times that challenge us are due to continue … and though I will be scrupulously a-political during my year I intend to underline the point that its by working together and seeing the best in one another that will ensure our city has a better, brighter future.

To that end I’d like to extend my personal congratulations to Cllr Dee Simson, whom I know will make an excellent Deputy Mayor and I’d like to thank Pete and his family for acting as our first citizens over the last year.

Finally I’d like to thank my Group and in particular my friend Cllr Meadows for nominating me and I’d especially like to acknowledge my friends and family for their love and thoughtfulness.

For this honour to be bestowed on me this year is particularly pertinent as in two weeks’ time, I will turn seventy; which feels quite the landmark …and to have these two events happen in the same year is both amazing and Mo-mentous.

Thank you all for your support and encouragement thus far, I hope to be able to recognise and repay that kindness during my year in office.”