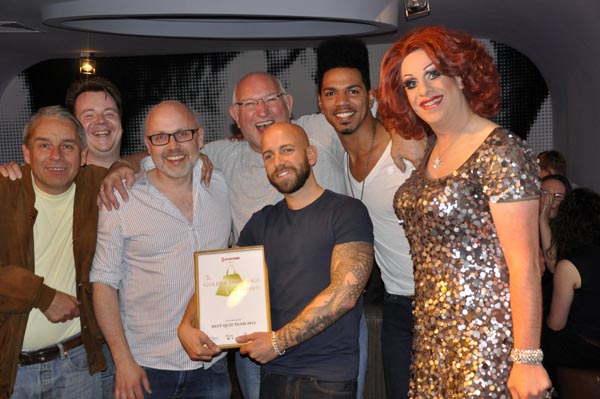 The first Golden Handbag of the season went to Charles Street Bar last night when they were crowned the Brainiest Gays (LGBT) in the Village at the Golden Handbag Quiz.

BEAR Patrol for the third year running came second with the Gscene B team coming in third.

The Quiz was hosted by a sparkling Lola Lasagne who described the event as her “favourite gig of the season.”

Lola took on hecklers, drunks and airline logo nerds alike in an entertaining community event, that brought together 22 teams from the LGBT and HIV voluntary sector, clubs, bars, social network groups, a gay choir, the police, local shops and for the first time at the Golden Handbag  Quiz, a team from Rainbow Families and Transtastic!

£550 pounds was raised from the entry fees paid by each team which will be distributed by the Rainbow Fund in their September, post-pride grants round.

James Ledward, editor of Gscene, said: “Many thanks to Chris Marshall and the staff at Charles Street for hosting the event, James Brooks and his trolly dollies, Huw Edward and Nicki Delmege, for creating the quiz and making it happen, Rupert Ellick for sound, Ian Andrew Mager-Playford for photographs and of course Lola Lasagne who was on top form.”

The final position of teams was: