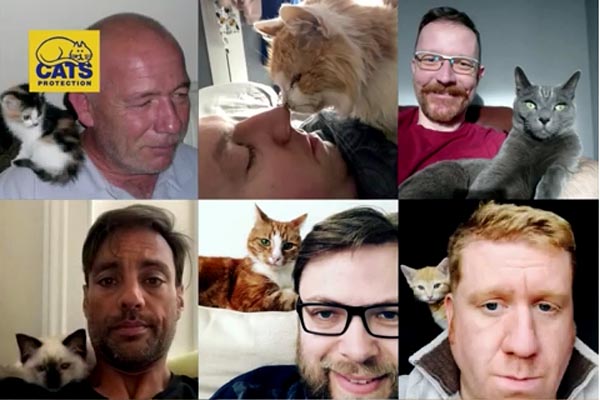 Does the phrase,“dogs are a man’s best friend”, put off would-be male cat owners?

NEWS revealed today by the charity Cats Protection shows that men who like dogs are still seen as more masculine than those who like cats, even though owning either pet requires the same compassionate qualities.

The findings came from a survey that asked 2,000 men to assign attributes to a man in two photos – one with a cat and one with a dog.

Cats Protection’s Chief Executive James Yeates explains: “Gender stereotypes like this have endured for years and, while there’s been a recent rise in male cat ownership, cats are still much more likely to be owned by women. We’d really like to see this gender barrier broken down and a lot more cat dads in the future.”

One man who holds no truck with stereotypes when it comes to feline friendship is stand-up comedian Jake Lambert.

“I think things are starting to change and more and more men are proud to be cat dads,” he said. “I feel so lucky to have my one-eyed cat Richard Parker and hope he feels the same. Cats are very independent and know to clean themselves regularly, so if anything I think most men could learn a thing or two from cats.”

As part of its Cat Men Do campaign, Cats Protection has been bombarded with hundreds of messages and photos on its social media platforms from men keen to celebrate the bond they have with their cat, using the hashtag #CatMenDo.

From these, the charity is creating videos showcasing these moggy-loving males in a bid for more men to step forward to show you don’t have to be a cat lady to be crazy in love with your cat.

Supporting the campaign is TV and Radio Psychologist Honey Langcaster-James who has done previous research on the psychological benefits of pet ownership.

Honey thinks being a cat dad can be an antidote to toxic masculinity. “I think it’s a welcome cultural shift to see men being more willing to show their softer side via their love of cats,” she said. “Although cats have been synonymous with women for centuries, nowadays loads of male celebrities, such as Ed Sheeran and Russell Brand, are sharing the limelight with their famous felines. After all, they can be the perfect pet for many as they help lower stress levels, they’re low maintenance and they don’t need walking which for some people can be a benefit. As a society we are increasingly accepting of men showing their softer sides without calling into question a man’s masculinity. There’s something really attractive about the kind of man who’s not afraid to show his love for his cat!”

To find out more about the campaign or how to adopt a cat from Cats Protection, click here: