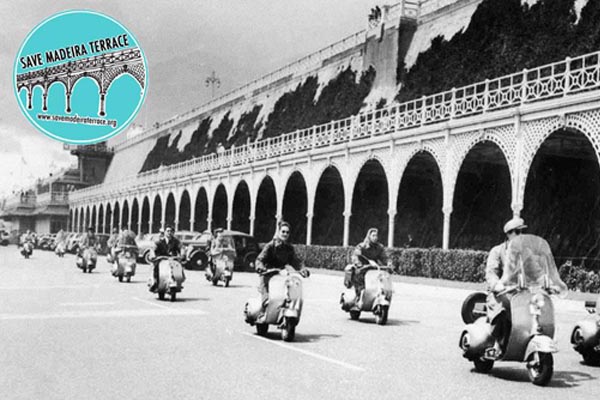 Crowdfunding campaign to kick-start restoration of Madeira Terrace hits 73% of its target with just 17 days to go.

A recent pledge of £15k by local firm Landsec has helped boost the fund up to over £310k while a groundswell of public support has seen the campaign attract over 1,500 backers, over 90% of which are individual members of the public, rather than organisations.

Howard Barden, head of the city’s tourism unit, VisitBrighton, which is leading on the campaign, says: “The campaign has ignited a sense of civic pride around improving the seafront and has seen a number of residents make it their mission to see the campaign succeed.

“Support for the terraces to be restored is evident and we’re now hoping to see businesses step up with some larger pledges in the last couple of weeks.  We have done phenomenally well but there’s still another £114k+ to raise.”

Kemp Town resident, Emily Senior, who is running a 10k race in Brighton on November 19 to raise funds for the campaign says:  “It has been heart-breaking to see the Terraces fall into such a sorry state.  At first, I felt angry that it had been so badly neglected but putting all that aside, I discovered the crowdfunding campaign and decided to actually “do” something to raise awareness and funds.”

Also supporting the campaign, are residents Jax Atkins and Derek Wright who have set up a raffle and are working tirelessly to collect prizes and sell tickets with the aim of raising £20k.

So far they have secured over 500 prizes from local businesses keen to show their support for the cause. Prizes include meals at top city restaurants, overnight hotel stays, spa treatments and gig tickets.

The draw will take place at the Cricketers pub, Ship Street on November 24, 2017.

Tickets are being bought by local Brightonians as well as people across the UK and even internationally via a specially set-up facebook group. Click here for more info:

Jax says: “Everybody likes a raffle and we decided we’d start one so that people who didn’t particularly want to pledge cash could buy a ticket instead. From wondering whether we’d actually get prizes at the start, to being inundated with offers, it’s been crazy – I think we’ve now hit the 500 mark – and still prizes are coming in!”

Derek adds: “I adore Brighton and am interested in its history. When the Madeira Terrace rescue plan was launched by the council, I pledged my support but also wanted to do something practical. Jax organised a clean-up on Madeira Drive and once I’d heard about her idea to hold a raffle, decided it was something I could get behind.”

Neighbours, Christopher Goss and Russell Miller are also helping galvanise the community and have been lobbying local businesses, leafleting and using social media as well as sending hundreds of e-mails to try and attract pledges.

Chris says: “1,500 pledges is a strong testimony to our community’s love and support for these iconic arches.  Most of these pledges are from local individuals like us who have dug deep into our pockets. We now hope that the business community will increase its pledges to enable the campaign to reach its funding target.  Renovation of the Terrace should be the catalyst for the long overdue regeneration of Brighton seafront from Brighton Palace Pier to the Marina.”

For more information or to make a pledge, click here: