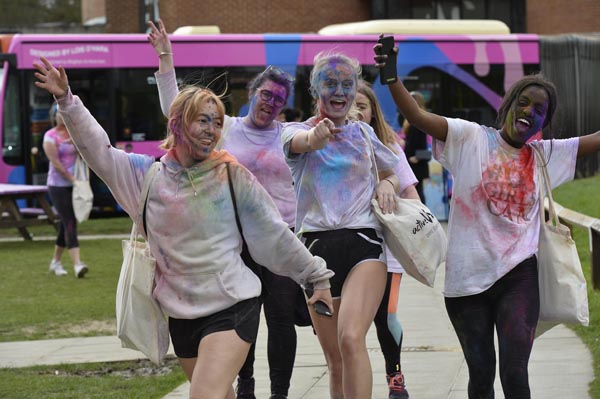 A striking new addition to Brighton & Hove Buses’ fleet was revealed amidst a volley of paint during Sussex University’s Holi festival celebrations (Wednesday).

The final design was chosen by Sussex University students.

It’s already out on the road serving route 25, which covers Brighton and Sussex Universities.

The new bus is part of the bus company’s Chatty Bus campaign, which aims to help combat loneliness and isolation by showing how bus travel connects people and communities.

Volunteers from Brighton & Hove Impetus, which connects people to reduce isolation and improve well-being, were on hand during the bus launch to give advice on local support services.

They also spoke to students who wanted to become Impetus volunteers, visiting those who need a bit of extra help and support out in the communities.

The Holi festival, a Hindu festival about love and togetherness, was part of Sussex University’s One World Week celebrations.

Brighton & Hove Buses’ Managing Director Martin Harris said: “We’re delighted to work with the university, Impetus and Lois to help tackle what is a serious and growing problem for many people in our city: isolation and loneliness.

“Lois has done a fantastic job designing a bus that we hope will make people feel good when they see it.”