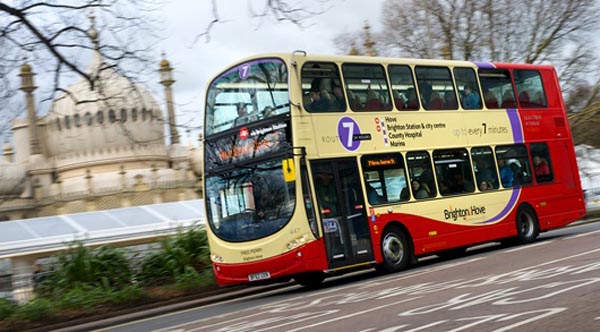 Brighton & Hove Buses will freeze cash and contactless bus fares in the city and keep price increases as low as possible when new fares go live on Monday, January 15 next year.

There will be a small increase to cash and contactless fares for journeys outside the city. Singles will increase by 10p or less and returns will go up by between 10p to 20p.

Returns from Brighton to Lewes, Newhaven and Seaford will be frozen.

Brighton & Hove Buses’ Managing Director Martin Harris said he had tried to freeze or reduce as many bus fares as possible but increases on some fares could not be avoided.

Mr Harris said: “I do understand that any sort of fare increase can be unwelcome but we’ve frozen many fares, reduced some and only marginally increased others, from a genuine desire to balance the need for ongoing investment and match the costs of the business with the pressure on people’s budgets.

“Great news for commuters is that they can now get a 20% discount when buying an annual pass through the East Sussex Credit Union affordable payment plan, previously a 10% discount.

“Our community deals won’t change, including discounts for carers and compass card holders, family offers and our 4 Work Saver, that provides a free travel start for new employees of local businesses.

“We’ve responded to demand and introduced some new mobile tickets, including a 4-day student ticket and a 4-day adult ticket. Also, child fares will be available on the mobile app for the first time.”

Martin said the company spent £7.6 million last year on ultra-low emissions buses at a cost of around £200,000 each. The plan is to invest in even higher specification vehicles to deliver zero emissions in the city centre, but these buses each cost at least another £100,000.

He continued: “We’re not the only vehicles that have historically generated city centre emissions and, despite progress, and the fact that bus travel improves emissions compared with car travel, we remain committed to doing more to improve the city we live and work in.

“Ignoring emissions and climate change would be irresponsible and we’re facing the issues head on, but it doesn’t come cheap. We’ve estimated we need to spend £172 million on new buses so that our buses are playing their part in an emissions-free city centre by 2030.”

Please see attached table for fares. The fares relate to Brighton & Hove buses only, not Metrobus. Also attached is an infographic showing where every £1 of bus fare goes.