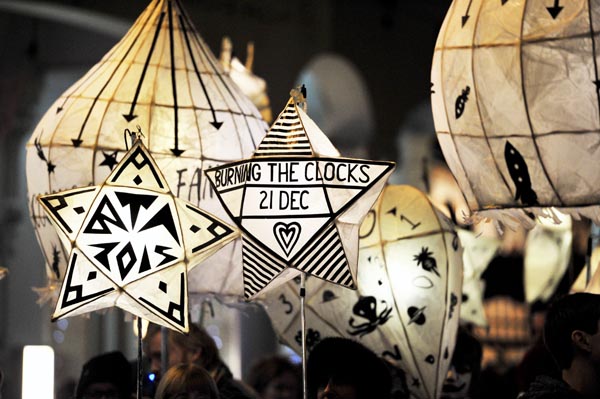 After two years of Covid cancellations, Brighton arts charity Same Sky has announced the return of the Burning the Clocks community event, which brings the whole city together to mark the shortest day of the year.

This year’s event is accompanied by an online crowdfunding campaign which continues to make the event possible.

The annual event, newly sponsored by Hanningtons Lane, starts on New Road at 6.30pm on Wednesday, December 21, with a parade that runs from the city centre to the seafront. The event’s organisers are expecting around 20,000 spectators to attend with nearly 2,000 people taking part in the parade.

The theme for Burning the Clocks 2022 is Wild, focusing on the untamed aspects of nature, winter, and the ever-changing elements of our world. Local artist Jo Coles has created an effigy inspired by the Wildermen of Europe which will be paraded through the city before being ceremonially burned in a bonfire on the beach. Jo took inspiration for the showpiece from the savage and raw elements of winter, and believes that the clocks joining the bonfire is how we make room for spring on the darkest day of the year.

Robert Batson, Same Sky executive producer, said: “It has been heartbreaking to cancel the event for the past two years, so bringing it back and in such a big way, is going to be so thrilling. Between the hundreds of lanterns, the builds our artists are preparing, and the fireworks show, the people of Brighton and Hove will be able to find a wondrous relief from the usual winter malaise. There’s no better way to celebrate the Winter Solstice”.

Burning the Clocks has launched a crowdfunding campaign to support the event which is essential for keeping it alive in the years to come. The event costs over £45,000 to produce each year and relies on support from the public to cover its growing costs. Onlookers watching the parade are also encouraged to contribute funds into donation buckets to help secure the event’s future.

The event has been partially supported by Arts Council England and the Chalk Cliff Trust, whose contributions have aided the increasing costs of materials, labour, and transport.

The Ledward Centre, Brighton’s LGBTQ+ cultural and community centre, is providing space for a volunteers’ briefing on the night, and Brighton & Hove City Council have also made in-kind contributions to support the event.

You can support Burning the Clocks by getting involved in their crowdfunding campaign here.