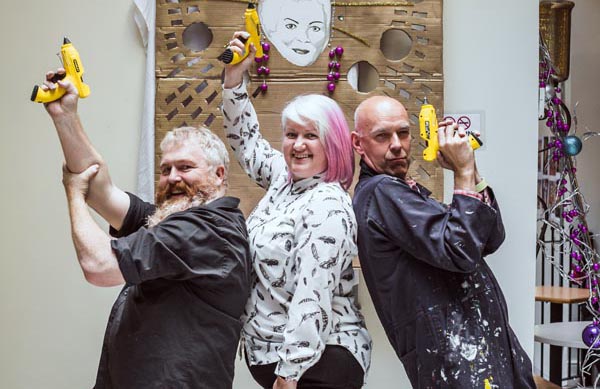 50 Queers for 50 Years pop-up workshop launches in Hull, the UK’s City of Culture in 2017, in build up to city’s LGBT 50 celebrations.

Acclaimed arts organisation Duckie are calling on the people of Hull to help them create giant figures of LGBT+ icons for a parade which will kick-start LGBT 50, a week-long celebration to commemorate the 50th anniversary of sexual freedom in the UK.

Renowned for award-winning work that ranges from cabaret to performance art to clubbing, Duckie have taken up residency in the city, which this year welcomes the first ever UK Pride.

Now they are inviting members of the LGBT+ community in Hull, East Riding and beyond to help create sculptures of key figures in LGBT history.

Duckie artist Robin Whitmore will work alongside Patrick Bullock and Hull costume designer Terry Herfield to lead drop-in workshops at the pop-up shop on Jameson Street to create 50 Queers for 50 Years that will feature in the Pride in Hull parade on Saturday, July 22.

The parade will kick-start Hull’s 2017  LGBT 50, a celebration of LGBT+ culture across the arts to mark the 50th anniversary of the partial decriminalisation of homosexuality.

Presented in association with Sewell Group, LGBT 50 will take place from July 22 – 29.

In consultation with local and national LGBT+ groups and individuals, Duckie have come up with a diverse list of icons to reproduce from an eight foot Gok Wan to a 3D replica of Hull gay pub Frankies Vauxhall Tavern.

Duckie producer Simon Casson said: “50 Queers for 50 Years is not only a celebration of the huge steps forward in society but also a chance to reflect on how recent these strides are and how fragile the foundations they are built on are. So in addition to a fag butt in a giant cabinet that will be paraded by four Dusty Springfield lookalikes, we’ll also play homage to footballer Justin Fashanu, who made reference in his suicide note to being treated unfairly because of his sexuality.”

Heath Marsh-McLeod Trustee at Pride in Hull, said: “We’re absolutely delighted that Duckie are heading back to Hull following their show at Fruit last year – it’s clear that people are enthusiastically throwing themselves into everything 2017 has to offer right across the arts, which is fantastic. We’re hoping for a similar response to the pop-up shop which will give people the opportunity to not only take part in the parade, but create something spectacular that will make Pride in Hull stand out and be remembered for years to come.”

Martin Green, Director of Hull UK City of Culture 2017, added: “It’s a special year for the city: not only is it UK City of Culture, but we’re hosting the first ever UK Pride. We’ll have the eyes of the LGBT+ community across the country and beyond firmly focused on us, which is why it’s really important that the Hull LGBT+ community are at the heart of our celebrations.

“The shop is the latest in a series of community engagement activity following the Yorkshire Dance workshops for Into the Light, Pride in Hull’s call-out for photographs for their A Moment in Time exhibition and our call-out for writers to take part in Lost Property, a series of writing workshops with award-winning playwright Tom Wells.”

The opening event on Saturday July 22 will culminate with a concert headlined by the legendary Marc Almond. The week-long festival will close on Saturday, July 29 with A Duckie Summer Tea Party featuring Into the Light, a new work by award-winning choreographer Gary Clarke and Yorkshire Dance, followed by a concert broadcast live on BBC Radio 2 presented by Scissor Sisters’ front woman Ana Matronic and BBC Radio 1’s Scott Mills.

Into the Light described as ‘a fast-forward version through LGBT history’ invites everyone to dance through the decades from 1967. Gary Clarke has created a moving dance celebration of our lives and loves, our challenges and our triumphs.

Follow the LGBT community’s emergence from a secret world, in which homosexuality was illegal, and join us for a riotous, family-friendly performance in the bright, open air. Anyone can become part of its cast, to register interest contact Kirsty at kirstyredhead@yorkshiredance.com

Throughout the week there will also be exhibitions, socials and debates, offering an opportunity celebrate Hull’s LGBT+ community and heroes past and present, freedoms gained, and to show solidarity with continuing struggles for LGBT equality in the UK and around the world.

Humber Street Gallery will host The House of Kings and Queens (July 27 – September 24), a specially commissioned exhibition of photography by Lee Price. Captured in Sierra Leone, where homosexuality remains illegal, Price’s powerful images offer a glimpse into The House where inhabitants can live without oppression, exposing what it means to be gay in Hull’s sister city Freetown.

The Hull LGBT+ community have also been getting involved in an exhibition of their own during the week-long celebrations. Titled A Moment in Time, the exhibition will reflect 50 years of change in attitudes and lifestyle told through the eyes of the LGBT+ community.

The shop at 95 Jameson Street will be open Thursdays and Fridays 4 – 7pm and Saturdays and Sundays 2 – 5pm until Pride in Hull on Saturday, July 22.