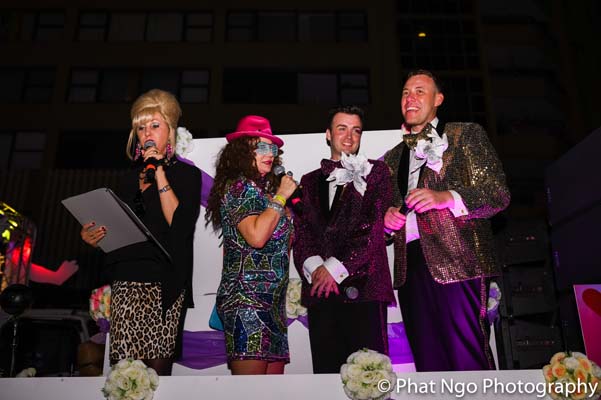 The pair exchanged vows surrounded by 80 of their closest friends and family, who danced behind a float, exchanging rings and saying ‘I Do’ as they passed through the iconic Taylor Square. Absolutely Fabulous, Patsy and Eddie lookalikes took on the roles of their celebrants, adding an additional theatrical air to the proceedings.

Stuart and James made global headlines in November 2017, when they got engaged after Australia’s divisive marriage equality postal survey.

The wedding float was DJ’d by TV presenter and the couple’s close friend, Danny Clayton, who kept the crowd dancing throughout the night.

The couple had campaigned for marriage equality in Australia for a number of years, with James starting the rainbow chalking movement in 2013, and co-organising the largest protest march in Australia’s history in September 2017 (40,000 people). He also sat on the board of Sydney Mardi Gras, until November last year.

Stuart said: “We’re so thrilled that LGBT couples can get married across Australia, we wanted to share our marriage with the world and where better than the 40th anniversary of Mardi Gras.

“We are so honoured to be able to do it here during this special time, we realise and acknowledge the shoulders that we stand on that has made this all possible. We did this with the blessing of some of our 78er friends, and given some of their partners passed before seeing the law change it is a very bittersweet moment.

He continued: “If one kid in rural Australia sees our wedding float and it helps them on their journey of self acceptance then it is all worth it. There is still a long way to go in Australia, and around the world, in the fight for equality and to stamp out homophobia.”

The couple hosted their reception the following day to round off the wedding weekend with 150 guests at the Kings Cross Hotel.