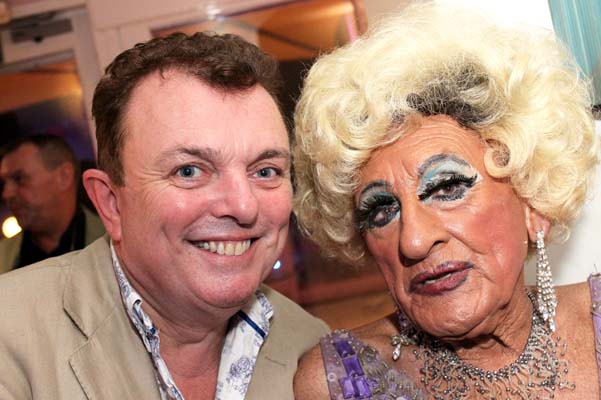 Brighton’s Jewel in the Crown was the phrase that Miss Jason chose to describe the much-loved David Raven aka Maisie Trollette, at the first of the celebrations of David’s 85th birthday which falls on August 15.

DECKED out in the evening’s pink, white and purple theme, Legends was packed to capacity with friends and fans including Chris Hayward who was David’s ‘Sister’ in eight pantomimes, Sue Douglas (another panto fellow actor to David) Jae Alexander who had taken the night off from conducting 42nd Street in London, and Josh Mills who had flown in from Amsterdam especially to play piano for the evening’s celebration.

After Miss Jason’s signature “let it swing, let it Rock ’n Roll”, David entered down the centre aisle to cheers and a standing ovation and entertained us with “I feel a song coming on” and “Anything goes” along with some top form banter demonstrating David’s years of experience, sharp wit and pure showmanship.

A very warm and funny video was shown with a birthday greeting from Paul O’Grady followed by Dave Lynn, Davina Sparkle, Lola Lasagne, Drag with no name and Miss Jason singing a very funny parody called “Fans of Maisie” to the tune of “Broadway Baby”. After each of them quoting a memory, a comment or praising David’s substantial and on-going commitment to charity work, they sang a tribute in the form of “Candle in the Dark.”

Next, a video of very interesting and, probably, formerly unseen photos of David through the ages was shown, during which time, Drag with no name supported the video singing the beautiful So, here’s to life resulting in another standing ovation and a few tears.

The stage was then handed over to Maisie and Josh for a sensitive Who can I turn to – with an interpretation that elevated David Raven in to the Star that he is.

After thanks to Claire Fuller for the technical support, Miss Jason joined David for Together then the tables were turned with a surprise for Miss Jason. David presented him with a painting of the two of them together performing at a former Brighton Pride….more tears ensued.

The evening finally came to an end with a masterful performance of If I never sing another song bringing true meaning of the current trendy phrase “acting through song” and was sensitively accompanied by Josh Mills. As ever, the audience would not let him go so we had a second encore What a wonderful world.

The evening had been put together by Miss Jason and Alan Cardew and was delivered with style, comedy and some very moving moments. Happy birthday David!