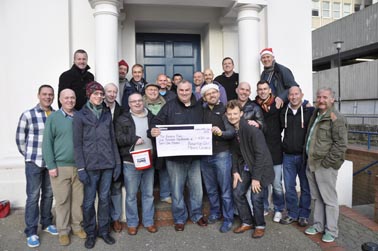 The Brighton Gay Men’s Chorus World Aids Day Concert We all live together at St Mary’s Church in Kemptown on December 1 raised a fantastic £1,131.00. for the Rainbow Fund. The chorus were joined during the concert by Brighton’s only LGBT choir, the Rainbow Chorus, Brighton’s female group of ukelele players, Qukelele,  Resound and children from the Theatre Workshop.

Each group performed by themselves then all the choirs came together for the finale to perform the Internaitonal OutPostChoir anthem You Make Me Proud composed by Brighton resident and former singer with the Brighton Gay Men’s Chorus, Howard Alexander. The evening was hosted by local writer, director and performer, Neil Bartlett

“I’d like to thank everyone involved with this event for their tremendous support and such a large amount raised for the Rainbow Fund. It was both a superb evening and also a remarkable way to mark World AIDS Day. This money will go directly to support the local LGBT and HIV community sector and will make a big difference to its work.”

The Rainbow Fund is administered for the LGBT community in Brighton and Hove by the Sussex Community Foundation and gives grants to LGBT and HIV organisations delivering front line services twice a year. The grants are administered by an independent grants panel which is chaired by Paul Elgood.

For more information about the Sussex Community Foundation, view:

For more information about the Rainbow Fund, view: