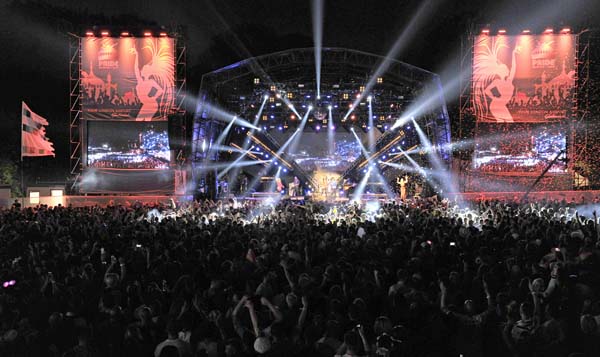 Brighton Pride exceed their fundraising target for Pride 2016, raising £100,000 for local good causes, bringing the total raised by Pride over the past four years to over £310.000.

The total is made up from a guaranteed ring fenced £1 per head on every ticket sold for the Preston Park Event and Pride Village Party as well as various Pride fundraisers and bucketing on the parade and park.

£90,000 will be donated to the Rainbow Fund who give grants to LGBT organisations providing effective front line services to LGBT people in the city.

£10,00 will be donated to the Pride Social Impact Fund established in 2015 to benefit the city’s communities in the areas most affected by the social impact of the Pride weekend celebrations. The fund is facilitated by editors from the local media.

Paul Kemp, Pride’s director, said: “I am thrilled to be able to announce we have broken our fundraising target for 2016 and matched the record fundraising of our 25th anniversary year in 2015.

“It has been a challenging year for Pride. Money raised from parade collection buckets (£1670.00) and contributions towards fundraising from local businesses is much lower this year. With many businesses across the city benefiting commercially from the influx of Pride visitors it remains disappointing that more don’t help with the fundraising effort.”

“Over 60% of visitors to Pride come into the City by train and with an announcement by Southern railway to find alternative means of transport and the planned strike from Pride Sunday at midnight, clearly this may have deterred visitors and effected business in the City. Wristband sales for Sunday Pride Village Party this year were down by two-thirds ”

“This year the Pride Parade had the biggest number of participants ever and there were new festival sites across the city. The Pride Festival on Preston Park has received the best feedback ever from visitors while Brighton & Hove Pride is recognised as the UK’s biggest Pride Festival bringing in an estimated £18million to the local economy”

Pride cost £1.5 million to stage this year. 70.414 tickets were sold for either the street party or the main event on Preston Park generating £70,414 for the Rainbow Fund. Official Pride parties raised £3,282.00 while the Pride buckets generated a disappointing £1,679.00 from people watching the Pride Parade.

The Pride Rainbow Fund Grant Awards will take place at the Hilton Brighton Metropole on September 21 when grants will be distributed to local LGBT charities, community groups and good causes.

In addition to Pride’s continued commitment to fundraising for the Rainbow Fund, in 2015 they also established a Social Impact Fund from Pride’s additional activities.

Pride will continue to work with community organisations to develop projects and ideas that could be of social benefit to the wider community.

Pride Social Impact Fund applications will open in October with grants being awarded in early 2017.