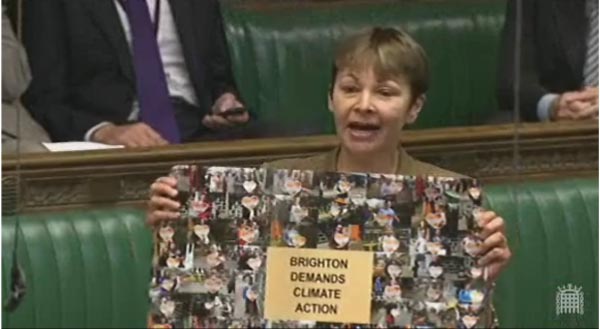 Caroline Lucas, took Brighton’s Big Picture petition to 10 Downing Street (and into PMQs) last week, urging David Cameron to ‘Show Some Heart’ for what matters most.

Not one to renege on a promise to constituents, Caroline Lucas, the Green MP for Brighton Pavilion, went the extra mile last week to show Ministers what matters most to her Brighton constituents.

Caroline says that hundreds of her constituents asked her to hold the Government to account on tackling climate change and urged her to back a major new national campaign, called For The Love Of….

So she did just that!

Caroline took to Brighton’s city centre last week to ask what residents loved most in the world and why they wanted to protect it from climate change. Passers-by got snap happy, sharing their views in picture form with the aid of a giant love heart.

Caroline created a collage of the petition messages and delivered it to Number 10, urging the PM to attend the important United Nations climate summit on September 23.

The petition included a letter setting out the key climate policies the UK must adopt and calling on him to commit to ambitious actions during the conference.

The proposals reflected what Caroline is lobbied about by Brighton residents.

During Prime Minister’s Questions, she unfurled the petition and asked William Hague MP to confirm the PM’s plans and priorities for the conference.

Caroline said: “The message from Brighton has been loud and clear. The Government is failing to do enough to tackle climate change and, for the love of our children, our world and our future, we need to put pressure on Ministers to change that. My constituents want a commitment from the Government to protect the things they love most from the destruction of continued climate change.”

Brighton residents cited their top loves as family and friends, birds and bees, forests, future generations and home, among others.

It comes when nearly one in five Brighton and Hove schools have gained the coveted Eco Schools Green Flag award, propelling the city into the top 10 greenest in the UK, as reported in the Argus.