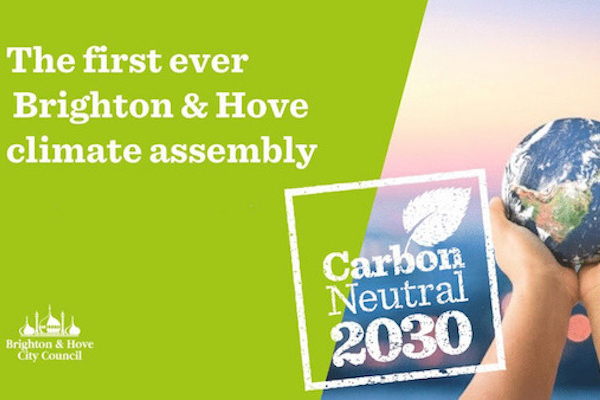 Around 50 residents came together online this week for the first of five sessions to look at how the city will address the climate crisis over the next 10 years and prioritise actions to take forward.  For more info on the Citizens Assembly on Climate, including when they’ll be meeting up again, CLICK HERE.

The climate assembly is focusing on the question: How can we step up actions to reduce transport-related emissions in the city?

This first session outlined what transport is like locally, how Brighton & Hove City Council (BHCC) is proposing to reduce carbon emissions by 2030 and what participants thought were the biggest climate change challenges for them.

Cllr Phélim Mac Cafferty, Co-chair of the Carbon Neutral 2030 Working Group, said: ‘The climate emergency affects us all, but we have the opportunity to do something about it if we act now.”

‘We’re proud and excited to be hosting the city’s first climate assembly.

‘It’s a chance for people to get involved and influence what the council and wider city does to address the climate crisis, and to provide ideas on how we can reduce toxic carbon emissions from transport in the city.’

Young people from across the city have also formed a Youth Climate Assembly, believed to be the first in the UK, to run alongside the citizens’ assembly. They will meet this week for an introductory session to discuss how they can use their unique perspective to feed into the work of big organisations.

Cllr Nancy Platts, Co-chair of the Carbon Neutral 2030 Working Group, added: ‘Local voices must be heard as we shape the city’s climate actions. As councillors we need to listen to what everyone has to say, people of all ages, backgrounds, and experiences.

‘I’m looking forward to hearing and taking forward the views of the youth assembly.Young people will inherit the consequences of what we do now.’

Due to safety precautions as a result of the Covid-19 pandemic, the assembly sessions are being held online. The second session will be on Tuesday, October 6.

For more info on the Citizens Assembly on Climate, including when they’ll be meeting up again, CLICK HERE.

The climate assembly’s report will be presented to BHCC in early 2021.