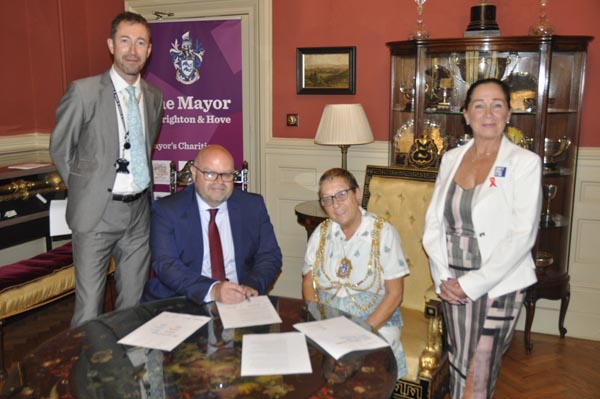 Brighton & Hove City Council signs up to international commitment to work towards eradicating HIV as a public health threat.

The Leader of the Council, Cllr Warren Morgan and the Mayor of Brighton & Hove, Cllr Mo Marsh, signed the Paris Declaration on Fast Track Cities ending AIDS at a gathering at the Mayor’s Parlour on Friday, August 3.

First launched on World AIDS Day in 2014, the Fast Track Cities initiative has gained support from more than 70 cities around the world.

Joining the initiative provides access to the excellent resources of the international Fast Track Cities team. This will help to better understand where best to concentrate efforts at a local level.

Brighton & Hove has the highest number of people diagnosed with HIV outside of London. In 2015, the most recent year figures are available for, NHS records show almost 1,700 Brighton & Hove residents used HIV treatment services.

The majority of people living with HIV in Brighton & Hove are likely to have acquired the infection through sex between men. While infections remain high locally, clinic data averaged out over the last four years, shows a 50% reduction in new diagnoses.

This trend is due to a combination of improvements; More testing is reducing the time between infection and diagnosis, which means people are likely to transmit the infection unknowingly. Also people with HIV are starting treatment earlier and are less infectious as a result. The proportion of HIV infection diagnosed late is 29% in Brighton and Hove compared to 40% in England.

Over the last thirty years there has been incredible progress in the diagnosis and treatment of people living with HIV.

People diagnosed early with HIV can now expect to have a near normal life expectancy. This is mainly thanks to improvements made in preventing transmission, prompt diagnosis and effective treatments.

Signing the Paris Declaration shows a commitment by the city to stop all new HIV infections and avert AIDS-related deaths.