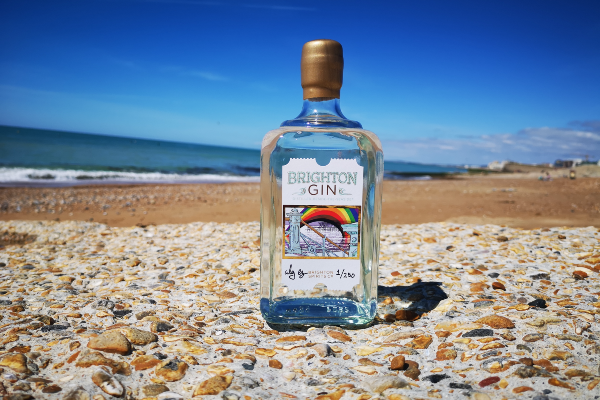 Multi-award winning craft distillery Brighton Gin has announced the release of its Pride 2020 Brighton Rainbow Fund bottle with £5 from each bottle sold donated to the grant-giving hub which gives funds to local, grassroots LGBTQ+ and HIV/AIDS organisations.

Working with the Brighton-based, Granada-born LGBTQ+ artist Alej ez, the limited edition bottle will be released for sale on Thursday, July 30, with an initial run of 250 bottles, individually signed and numbered by the artist, making each one a unique artwork.

Alej ez, said: ‘My work reflects my intrinsic LGBTQ+ nature and interests. The flag is our symbol and represents us. I researched what is arguably the LGBTQ+ rights movement’s most recognisable and unifying symbol – the original rainbow flag was designed by the gay rights activist Gilbert Baker in 1978 and lies in the London Design Museum. I had a eureka moment, imagining this rainbow flag across Brighton skies reflected by the sea.

‘The final image shows the Victorian railings along the Brighton & Hove promenade with the inviting steps that take you down to the pebble beach and welcome you to the sea, where the iconic structure of the remains of the West Pier stands.  We may not be able to celebrate together this year but I am also inspired by the movement named ‘Pride Inside’ – we are proud no matter what.’

Every year since 2016, Brighton Gin has released a limited edition Pride bottle to not only celebrate Brighton & Hove Pride but also to support the work of the Brighton Rainbow Fund. This year is a landmark year for the global Pride movement, marking the 50th anniversary of the first Pride march and 30 years of Brighton & Hove Pride. Through their Community Spirit initiative, Brighton Gin has supported hundreds of community organisations and charities across the city and beyond.

Kathy Caton, founder of Brighton Gin, said: ‘With the Brighton Rainbow Fund having lost its major fundraising event through the necessary cancellation of Brighton & Pride, we want to do all we can to support their work with grassroots community organisations doing such vital work in Brighton and beyond.

‘We may not be able to be together in person, but we can raise a glass to better times to come and raise funds at the same time.’

Chris Gull, chair of the Brighton Rainbow Fund, added: ‘Thank you so much Brighton Gin for raising funds, yet again, with another beautiful limited edition Pride bottle.

‘All the money raised will be distributed as grants to the local LGBTQ+ and HIV projects that we support. It’s a tough year for all of them, trying to continue to support hundreds of LGBTQ+ people in Brighton & Hove between them who require their vital frontline services.’