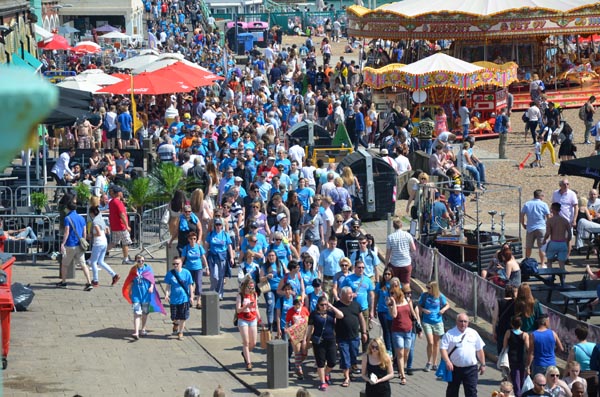 The Walk, the charity’s largest annual community-based event, took to the streets of Brighton for its sixth consecutive year with more than 700 registered walkers raising awareness of LGBT equality and the issues faced by the lesbian, gay, bi and trans community.

Ruth Hunt, CEO, Stonewall said: “The Equality Walk is an important time to come together as a community to be visible and to celebrate the LGBT community.

“However, it’s also a time to reflect on how much work there is still left to do, and remember that we must never be complacent about the progress of lesbian, gay, bi and trans equality.

“This could not come at a more poignant time, after the violent homophobic attack we’ve witnessed this week on a same sex couple in Brighton, a city renowned for celebrating diversity and inclusion.

In addition to the walk, entertainment in Brighton’s Pavillion Gardens was hosted throughout the day by Brighton community station Radio Reverb 97.2fm.

Kathy Caton, Producer, Radio Reverb said: “It was an absolute pleasure and an honour for Radio Reverb 97.2fm to be asked to be involved in the Stonewall Equality Walk.  As the presenter of Brighton’s only LGBTQ radio show, I feel representation, visibility and solidarity are absolutely vital – and that the work is far from done.  We live in an age where to call someone or something ‘gay’ is the ultimate playground insult, and I fully support Stonewall’s work in schools to challenge, educate and inspire around this.”

Money raised by either the 10K or family friendly 3K route will help support Stonewall’s work in schools and with young people.