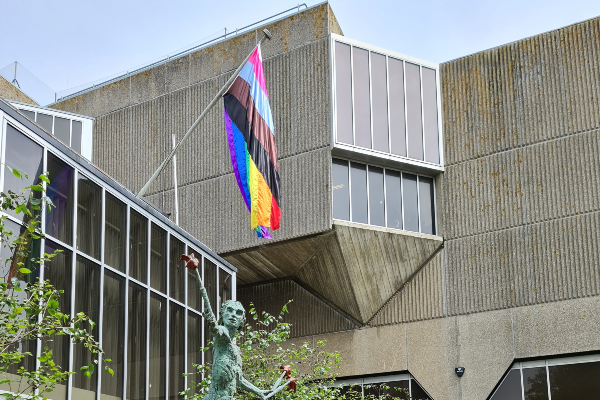 Brighton Council to fly Inclusive Rainbow Flag for three days from Monday 28 June to mark the anniversary of the Stonewall Riots.

On 28 June 1969, police raided the Stonewall Inn, a bar in New York City, leading to three nights of unrest that was largely led by LGBTQ+ people of colour, including Marsha P Johnson, Sylvia Rivera & Stormé DeLarverie. That incident ignited protests both around the country the world and half a century of activism in the push for LGBTQ+ equality and inclusion. Remembrance and celebrations now happen around the globe on the anniversary of Stonewall Riots. The council is flying a version of an Inclusive Pride Flag selected by the LGBTQ Workers’ Forum.   The design recognises that the modern LGBTQ+ movement began through the support and leadership of Black Trans Women and that in the present LGBTQ+ Black and Minority Ethnic people are more likely to experience inequality, transphobia, homophobia, and racism.  The colourful design also symbolises how everyone has many parts to their identity and that we should all work towards a world without prejudice and discrimination.

“Today Brighton & Hove City Council is proudly hoisting the LGBTQ+ Inclusive Pride flag over our town halls and changing our social media profile images for three days to remember the Stonewall Riots and the three nights of unrest.

“52 years after the Stonewall riots, prejudice is still ruining lives.

“Although there is no question many positive changes have been won, the work continues because transphobia, biphobia and homophobia are sadly still rife today.

“In the last few weeks we have seen in the UEFA tournament where Munich’s Allianz Arena was blocked from lighting up in Pride colours when Germany played Hungary – a country with notorious homophobic legislation, banning gay people from featuring in school educational materials.

“It is one year since David Wails, James Furlong and Joe Ritchie-Bennett were stabbed to death in a homophobic hate crime in Reading. Homophobic graffiti was daubed in Manchester’s Gay Village just last week.

“And all of this is borne out in facts from the Home Office: transphobic hate crime grew by 16% last year and there’s been a 19% increase in homophobic and biphobic hate crime in just one year.

“This of course doesn’t include the four in five LGBT people who have experienced a hate crime or incident and didn’t report it to the police, according to renowned LGBT equality organisation Stonewall.

“So the work continues with Sussex Police and communities across the city to fight for a more equal city.

“The ongoing pandemic has meant that traditional Pride parades, celebrations and protests have not been able to happen with both Trans* Pride and Brighton & Hove Pride unable to take place in 2020 and 2021.

“So it is even more important than ever that we make visible the lived experience of our diverse LGBTQ+ community and the ongoing march for equal rights.

“Brighton & Hove has been a beacon city for trans, non-binary, gender queer and LGB communities which our city proudly celebrates and values.

“Many people have come here because we are known as an inclusive city with a diverse and intersectional community, but we must never forget the struggles of the past or the ongoing march towards equality and inclusion for all.”

Also speaking about the importance of remembering the riots, Shanni Collins a member of Brighton & Hove City Council’s LGBTQ Workers’ Forum Steering Group, said that that challenging prejudice and fighting for LGBTQ+ rights remains as necessary now as it was in 1969, she said:

“Marking the anniversary of the Stonewall Riots is an important ritual for the LGBTQ+ community.

“It reminds us of the ongoing struggle of our communities to be seen, heard and allowed to thrive on our own terms protected by the laws of the lands we live in.

“It reminds us of the people who fought so hard both at Stonewall, and before,  to make their voices heard, and it asks us to reflect on our history of working together, as Lesbians, Gay men, Bisexuals, Trans and intersex, gender diverse peoples and their allies to challenge prejudice, raise awareness and fight for our rights.

“This struggle continues today, but by marking the anniversary with the new inclusive rainbow flag, we get to see all our truly intersectional history represented and honoured by this special city we are so proud to call our home.

“As Harvey Milk said ‘Hope will never be silent’”.

Everyone in Brighton & Hove has a right to feel safe. The council encourages anyone who has experienced  or witnessed anti-social behaviour or hate incidents, including harassment or distress due to their identity, to report it

The community safety team works closely with the police and local diverse communities to prevent anti-social behaviour and hate incidents and support anyone affected.

If you have experienced or witnessed hate crime, the community safety team are here to support you and provide advice. You can contact them:

Or report hate incidents to Sussex Police or call them on 101 if it’s not an emergency.

You can find support and advice if you have experienced or witnessed hate crime from the Rainbow Hub, the city’s LGBTQ+ Community Hub.