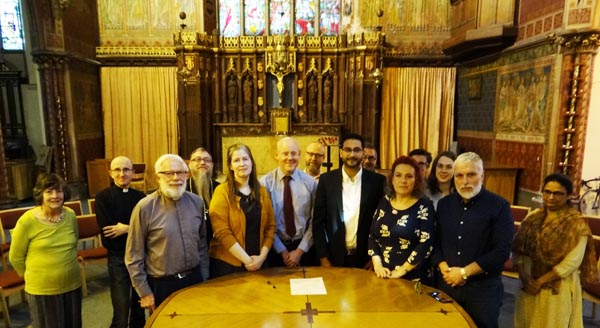 Representatives of Jewish, Muslim, Anglican, Catholic and Coptic faith groups have untied to establish a Combatting Faith Hate Partnership to tackle the huge rise in religiously motivated hate crime in the city.

COMMENTING on the launch of the project, the chair of Brighton and Hove Faith in Action (BHFA) trustees, Rik Child, said: “This project was proposed after shocking official figures published last year showing recorded religiously motivated hate crime has soared by 1,000% since 2013. The latest figures show 32% relate to Antisemitism and 49% to Islamophobia.”

Rik continued: “We are really pleased to have formed a partnership with the major faith groups in the city and have put together a three part plan to increase religious tolerance. We are looking for members of the public, from all faiths and none, to join our faith tour later in the year so please do get in touch with our project coordinator Lev@bhfa.org.uk if you’re interested in joining.”

The Partnership, which is funded by Brighton and Hove City Council, was formerly launched at a signing ceremony at the April meeting of the City’s Faith Council (photo above) where the three parts of the project were outlined:

Fiona Sharpe of the Sussex Jewish Representative Council, said: “In these times of increasing racial and religious intolerance, I am proud to be part of this initiative, bringing together people of faith to support one another within our City of Sanctuary.  It is particularly important that we are outward facing and I am pleased that a major part of the work we will be undertaking is to go out into schools and colleges to further educate young people about Islam and Judaism.  Religious intolerance is caused, in large part, by fear and lack of knowledge.  We will try to address both of those issues”

Tariq Jung, Chair of Brighton and Hove Muslim Forum, added: “We have said before this must be a joint effort – with all faith groups working together – so we’re very pleased to be part of a partnership that includes our friends in the Christian and Jewish communities. We are determined to tackle all forms of religious hatred we see in Brighton together, especially Antisemitism and Islamophobia.”