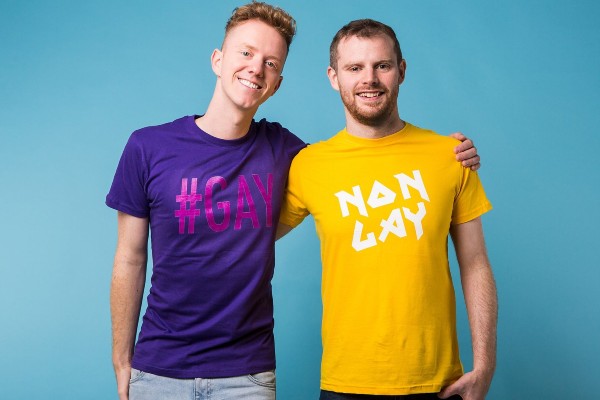 Brian Butler looks forward to the award-winning podcast A Gay and NonGay coming live from Brighton with its unique brand of comedy about lgbtq issues.

Hosts James Barr and Dan Hudson are bringing their special guests to Brighton’s Komedia  on the first date of a UK tour of their show, which is broadcast weekly.

Described by the Radio Times as “ one of the most fundamentally kind and funny podcasts in Britain “ the show promotes equality , freedom and friendship , while making listeners laugh; with traditionally taboo subjects being cracked  open by honest conversation.

In Brighton James ( Gay ) and Dan (NonGay) will be joined by author Juno Dawson and Stephen Webb and Daniel Lustig (gogglebox ).

The producers told Gscene “ In a time when so many people are threatened by a rhetoric of hate from people in power , a Gay and NonGay challenges our differences head on and resolves that no matter who you are, or what you’re into, love is love and Gays and NonGays can be friends . “

The podcast will be on Sunday 22 March at the Komedia, Brighton.