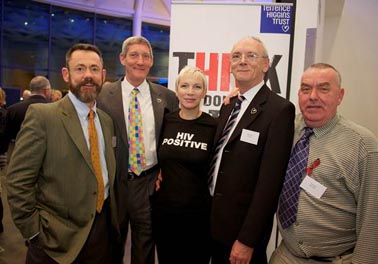 Boris Johnson the Mayor of London is backing a major HIV testing campaign in the run up to World AIDS Day this Saturday, December 1.

The testing campaign runs from November 23-30 and aims to increase testing among the most at risk populations, gay men and Africans in particular.

“London is home to almost half of all people living with HIV in the UK, but a quarter of them are unaware they carry the virus. It is vital that people who might be at risk get tested, not only to reduce the risk of transmission to others, but to ensure they get the life-saving treatments that are available.”

“Stigma, fear and complacency are the greatest obstacles to people seeking out their HIV status. This is why Terrence Higgins Trust and the Mayor of London have taken this initiative to encourage those most at risk to take the HIV test.  Knowing your status can literally be a life saving action.”

Gay men and Africans remain the groups most at risk of HIV in the UK, with around 1 in 20 people from both groups infected with the virus. That number rises to one in seven among men on the London gay scene.

A quarter of people with HIV in the UK remain untested and unaware they have the virus.

Terrence Higgins Trust (THT), which is co-ordinating National HIV Testing Week as part of HIV Prevention England’s Think HIV campaign, marked 30 years at the forefront of campaigning on HIV and sexual health with a reception at City Hall, attended by Annie Lennox, the Deputy Mayor for London Victoria Borwick and other community activists, including people living with HIV.

“THT was founded by a handful of people in a flat in London 30 years ago. Today we provide services for thousands of people every year and London remains at the centre of the HIV epidemic in the UK.

“We are delighted that the Mayor and his Ambassador are backing our campaign to encourage more Londoners to get tested and to drive down rates of HIV in the capital. We are determined to work together with the Mayor’s Office and local councils, to strengthen the capital’s response to HIV.”

“Terrence Higgins Trust continues to play a key role in educating people so they can protect themselves against HIV, as well as providing advice and support to people living with and affected by HIV. I hope this year’s campaign for World AIDS Day will encourage anyone with concerns to seek out advice and get tested.”