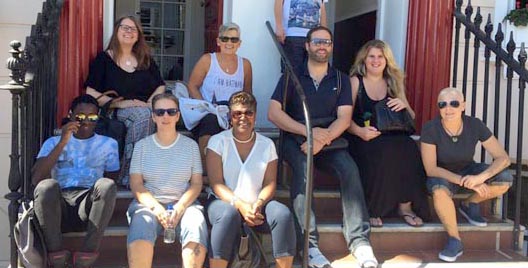 Blueprint 22 is a not-for-profit youth organisation operating along the coastal strip from Brighton to Bognor Regis.

They work with anyone aged 16-25 and over the last 5 years have run 101 youth-led projects working with 1270 different young people.

These project included Face Value; a project working with young trans people in Worthing; Profile LGBT Project; a two-year drop in project to build confidence in young people, help them make friends and feel valued as part of the wider LGBT community and Screen Out; an LGBT film project led by author Rose Collis looking at LGBT film history and how it is linked to Worthing.

At Brighton Pride 2016, they partnered with Brighton & Hove LGBT Safety Forum to deliver the ‘Unity in the Community’ project, funded by the Big Lottery, giving young people the opportunity to volunteer on the Pride Parade, and in the access and family tents on Preston Park. On the day of Pride twenty-five Blueprint 22 young people and support staff had the opportunity to showcase their skills, help others and have a positive impact on LGBT families and the wider community.

In August this year, The New Steine Hotel, Brighton kindly hosted their bespoke Autism Awareness Training, enabling young people and support staff to learn together about how to best support others and remain inclusive.

In October 2016, they will be launching a new employment and enterprise project called Work It OUT for LGBT young people across Brighton & Hove. The project will involve LGBT mentors and intensive support to help young people reach their work related goals and is funded with a grant from the Rainbow Fund.

Their second Youth Awards event will take place in October 2016 to celebrate and reward young people’s achievements, has been sponsored by a range of Brighton businesses and will be hosted by Billie Lewis Promotions.

In December 2016, they will be launching a pilot scheme called ‘Reaching Out’, funded by the Adur County Local Committee, Worthing Community Chest and the O2 Think Big initiative. The youth-designed project will span from Brighton to Bognor Regis and aims to show the community that young people care and want to give something back.

They will do this by sharing gifts and cards and visiting older people during significant holiday periods. Having made links with key organisations who already support older people, young people will be directed to those who are most in need of this project.