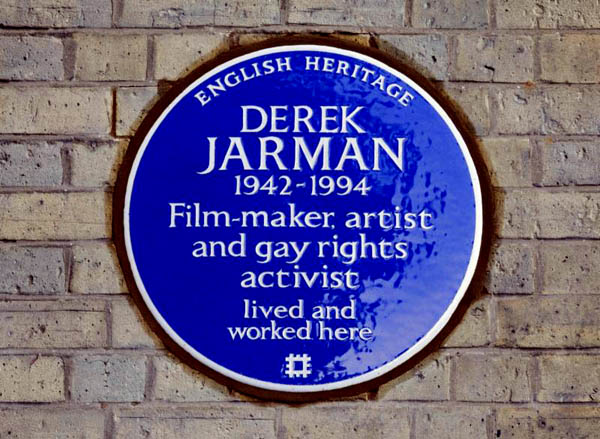 A prestigious Blue Plaque was unveiled in London on February 19 to commemorate the avant-garde film-maker, and LGBT+ activist Derek Jarman on the 25th anniversary of his death from HIV in 1994.

THE unveiling was performed by the actor and director Dexter Fletcher and took place at Butlers Wharf Building, 36 Shad Thames, SE1 2YE, where Derek once lived and worked.

Speaking at the unveiling, Mr Tatchell said: “Derek was a personal friend and I worked with him for many years. He was a strong supporter of the LGBT+ direct action group OutRage! and was arrested in 1992 when we tried to march on Parliament to demand the repeal of anti-gay laws. As he often reminded people, he spent most of his life as a criminal under legislation that outlawed homosexuality. He gave me and other OutRage! members a cameo part in his film Edward II, to highlight the parallels between Edward’s violent demise and contemporary anti-LBGT violence.

“Derek was the first UK public figure to come out as HIV positive, at the AIDS & Human Rights conference that I organised to parallel the World Health Minister’s first summit on AIDS in 1988. He was a trailblazer in every aspect of his life and work – a fierce critic of everything conventional and orthodox. A true innovator.

“One of his favourite quips was from Dorothy Parker: ‘Heterosexuality is not normal. It’s just common.’ I was honoured to have Derek as a friend and comrade.”

English Heritage Trustee and Blue Plaques panel member, David Olusoga, added: “Jarman was a major cultural figure of the last quarter of the twentieth century. He was a unique voice in cinema, an important campaigner for gay rights, a painter and a gardener. He brought a creative and disruptive energy to everything he did, at a time when it was urgently needed. We are delighted to honour him here on the South Bank, where he began to create his Super 8 universe.”