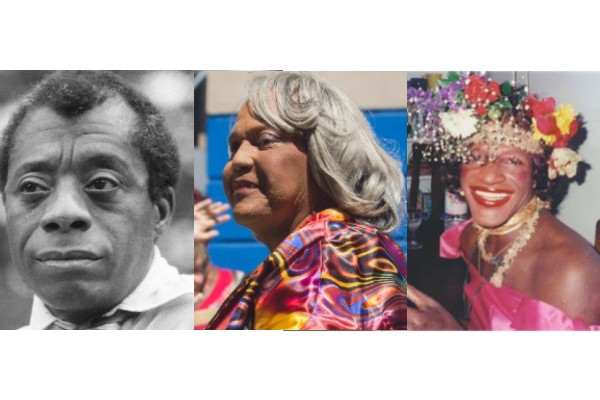 Black members of the LGBTQ+ community have played pivotal roles in the ongoing fight for racial, sexual and gender equality. However, systematic racism within the LGBTQ+ community has marginalised black and POC communities, with Stonewall finding 3 in 5 black queer people have experienced discrimination within their local LGBTQ+ network. LGBTQ+ acceptance is also less prevalent in black and POC communities, with 2010 research finding acceptance levels of homosexuality stand at 42% among the UK’s black and Asian population, leaving LGBTQ+ POCs left on the margins of society.

As a result of the ongoing racism within and outside of the LGBTQ+ community, the achievements of black activists are not always discussed as widely as those of white LGBTQ+ advocates. This Pride month, we are remembering the work of black activists who paved the way for equality.

1924-born writer and critic, James Baldwin, is best known for spending his life educating others about black and queer identities, as well as his famous 1956 novel, Giovanni’s Room, which contained explicitly queer characters. Baldwin realised he was gay during his teenage years, and subsequently immigrated from the US to Paris to escape discrimination. He published his first novel in 1953, and his first collection of essays two years later. Much of his writing explored racial and sexual tensions in the 20th century Western world, as he articulated the struggles black and LGBTQ+ Americans faced.

He was featured on the cover of TIME Magazine in 1963, which dubbed him the only writer to “express with such poignancy and abrasiveness the dark realities of the racial ferment in North and South.” Although he was not overly vocal about his sexuality, and denied the label ‘civil rights activist’, he was one of only two out gay men who had any involvement in the civil rights movement. After dying in 1987 due to stomach cancer, Baldwin is remembered as a pioneering writer, who was one of the first to integrate both the fights for sexual and racial equality into his work.

Audre Lorde, born in 1934, described herself as a “black, lesbian, mother, warrior, poet”, and dedicated her life to addressing systematic inequalities through poetry and writing. After graduating from New York’s Hunter College in 1959, Lorde became an active member of the gay community in Greenwich Village. From there, she went on to become a well-renowned writer and an international activist, having kick-started the black rights movement in Germany after travelling to Berlin for a professorship. In the 1980s, Lorde published two of her most influential pieces of writing, thus cementing her legacy in literature.

The first was Zami: A New Spelling of My Name (1982), which Lorde described as a “biomythography”. It chronicles her childhood and adulthood, as she grappled with homophobia, sexism and racism. She later released a collection of essays titled Sister Outsider, where she asserts the need for marginalised groups to make their struggles visible. Lorde asserts the necessity of making the experiences and struggles of marginalised groups visible. She died in 1992 after a battle with breast cancer, but has since had the Audre Lorde Award created in her name to honour works of lesbian poetry. The Audre Lorde Project was also founded in Brooklyn to support black LGBTQ+ people.

80-year-old black trans activist, Miss Major Griffin-Gracy (otherwise known as Miss Major), is a prominent figure in trans communities of colour, and participated in the 1969 Stonewall riots. Born in Chicago in 1940, Griffin-Gracy experienced homelessness as a young trans person, before moving to New York where she established herself as a member of the local LGBTQ+ community. She was a leader in the Stonewall riots, but was taken into police custody before being released in 1974 where she continued to fight for LGBTQ+ rights.

She directly supported trans women who were experiencing homelessness or drug addiction, and served on multiple HIV/AIDS organisations during the 1990s. In 2003, she became the executive director of the Transgender Gender Variant Intersex Justice Project, shortly after it was founded by Alex Lee. Here, she led efforts to improve the treatment of trans prison inmates and end police brutality against the LGBTQ+ community and black communities. A 2015 documentary titled Major! details the life of Griffin-Gracy and wider trans history in the US. Today, she continues to advocate for black and trans equality, and has won two awards for her work.

Self-identified black bisexual trans woman and drag queen, Marsha P Johnson, is best known for being an influential 20th century activist and pivotal figure in the 1969 Stonewall riots. Born in 1945, Johnson grew up in a strictly religious family and moved to New York at only 17, where she embraced her identity and became a much-loved figure in the local LGBTQ+ community. She was a founding member of the Gay Liberation Front and co-founded the Street Transvestite Action Revolutionaries alongside Sylvia Riviera. The pair later set up the STAR House in 1972 to provide a shelter for homeless LGBTQ+ youth.

Johnson was one of the first drag queens to go to the Stonewall Inn, after it began allowing all members of the LGBTQ+ community to enter, and was known to have been there when the riots against police brutality began. She also marched in the first ever Pride rally in 1970, and was an AIDS activist, working for advocacy group ACT UP. Johnson was found dead in 1992, and while police initially ruled her death as a suicide, friends insisted otherwise, and the cause of her death is still unknown. Her legacy was preserved in 2017 documentary The Death and Life of Marsha P. Johnson, which chronicled her life’s work and explored the possibility that she was murdered. Drag superstar RuPaul referred to Johnson as “the true drag mother” who “paved the way” for contemporary queens.

Founder of the Black AIDS Institute, Phill Wilson, is known for being one of the most prominent African-American HIV/AIDS activists, with his work beginning after he and his partner, Chris Brownlie, were both diagnosed with HIV in the midst of the 1980s epidemic. Wilson was active in the Chicago LGBTQ+ community, but ventured into activism after moving to Los Angeles, where he organised a vigil for AIDS victims. He then took on roles at the LA AIDS Project and later served as co-chair of the LA HIV Health Commission.

After founding the Black AIDS Institute in 1999, Wilson went on to be appointed to former president Obama’s advisory council on HIV/AIDS. Although he has since stepped down as CEO of the Black AIDS Institute, he continues to raise HIV/AIDS awareness among black communities and hopes that after his death, black people across the world will continue to educate others and strive for a world with no new HIV transmissions.