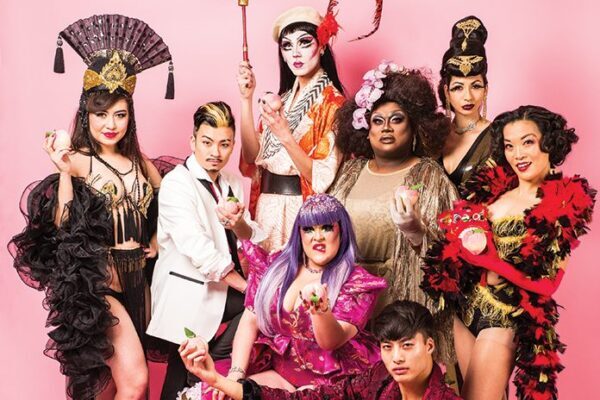 Formed in 2019, Bitten Peach is “the UK’s only Pan-Asian cabaret collective.” They made quite an impact on the cabaret scene before the pandemic. Now we’re – hopefully! – post-lockdown, Bitten Peach are heading back on the road. You can catch them at Brighton Pride in August at the Ironworks.

The phrase “Bitten Peach” has major homosexual resonance in China. The largely mythical figure of Mizi Xia lived – or was invented – in the Zhou dynasty era. He gave a half eaten peach to Duke Ling, who basically fancied him. Think about that scene in Call Me By Your Name – plus ça change. There are also queer Chinese references to the “passion of the cut sleeve” but we won’t go there!

To find out more, we caught up with Lilly SnatchDragon, a co-founder of Bitten Peach and “Neo Drag Queen Burlesque Performer.” First of all, what inspired her to start Bitten Peach?

Lilly noticed some unfortunate stereotyping at Lunar New Year (sometimes conflated with Chinese New Year), such as non-Asian people wearing bathrobes as kimonos. “There’s no reason for white people to dress in bathrobes celebrating a New Year they don’t even understand.” Lilly was also getting tired of being the only Asian performer on the bill at cabaret events.

She formed Bitten Peach with fellow performers on the cabaret scene. They sold out as soon as they announced their first shows. Was that because of the individual performers or the nature of the group? “I think it was the collective aspect – no one had really seen an all-Asian group. ShayShay has a good following, I have a good following and Evelyn was upcoming. I think it was mostly because people had never seen anything like it.”

Their audiences are very diverse. For The Glory show the venue was so packed they had to turn people away. “The Glory is amazing. John Sizzle and the rest of the team are so supportive. They even gave us the money to do the decorations for the show.”

What can we expect from a Bitten Peach show? “Expect a variety show. We have a mixture of different skills. People come to see us because we’re a collective, we’re a family. People are made to feel welcome. Especially after being othered so much. And you’re going to have camp, you’re going to have comedy,” she pauses. “It’s early and I’ve only had half my coffee! You can expect some subliminal education too. We always bring to life Asian hate and the stereotypes a lot of us face. It’s about celebrating the skin we are in. It’s about being unapologetically who we are. We’re here to celebrate who we are and everyone is welcome. You can expect a lot of love.”

During the pandemic, they stayed in contact over a Whatsapp group. A space where they could vent, connect and share. Shared cultural references are also important. “I can discuss rice cookers and everyone knows what we’re talking about.” They also filmed BBC Ident during lockdown about a cabaret cooking family. “I describe Bitten Peach as the family I didn’t even know I needed.”

“We have a lot of shows coming up. We’ll be performing at the Garrick Theatre on 5 August. Come and have a look at who we are. Attend and support as many POC shows as you can. The Cocoa Butter Club I have to give a massive shout out to as well. It’s run by a performer called Sadie Sinner. Without The Cocoa Butter Club, cabaret wouldn’t be what it is today. Without Sadie there wouldn’t be so much diversity in cabaret. I’ve done loads of shows with them, including their opening night where they had to turn people away.” The Cocoa Butter Club is based in London. Be sure to follow them and check out their pioneering work.

Lily SnatchDragon is considered to be on the of the UK’s best burlesque performers. She’ll be performing at the Garrick Theatre show. “I’ll be on stage with Fancy Chance, who is absolutely epic. Look her up. If the world ended, the only living things would be cockroaches and Fancy Chance. We also have Aisha H – she does martial arts. She performs with whips and does dagger throwings! We also have Mahatma Khandi who’s part of Bitten Peach. We also have Raheem – known as Doza Cat. The latter is trained in classical Indian dance which they interpret through their drag. We’ve got ShayShay, we’ve got Evelyn. We’ve got drag kings, we’ve got circus, we’ve got burlesque. I like to put on shows that have a lot of variety.

The Bitten Peach are performing at The Ironworks for Brighton Pride on Sat 21st August 2021.