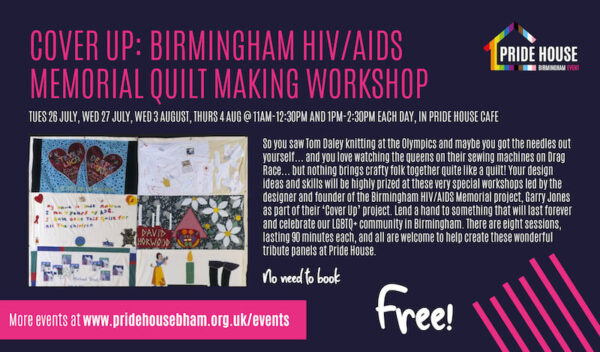 The Cover-up Quilt is an Arts Council-funded community art project, inspired by the original AIDS quilt which began in San Francisco in 1984. The AIDS Memorial Quilt is now the biggest piece of public, community art in the world, and panels were created to remember people who had been lost to AIDS.

To mark 40 years since the first diagnosis in 1981, the Birmingham AIDS and HIV Cover-up Quilt community art project aims to create 40 panels that will represent significant parts of history across those years, both in Birmingham and nationally and internationally too.

This project is being led by artist Garry Jones, who will be running quilt making workshops during the Pride House schedule. Quilted panels will be designed, created, and produced based on a list of 40 themes that will be approved by Garry. The first panel of the quilt has already been created using the slogan Positively Red, which was used as the tag line for World AIDS Day with red ribbon heart from 1998. When all the panels are complete and finished with a red quilted back and red ribbons to tie together, they will form a cover-up for the HIV and AIDS memorial unveiling on World AIDS Day 2022 – December 1.

Following this unveiling, the quilt will be a stand-alone art piece that will be used and exhibited in public places such as colleges and art galleries as a tool in the remembrance, education and celebration of AIDS and HIV.

The quilt making workshops will be run July 26-28 and August 3-4, 11am-12.30pm, at Pride House Café, Wynner House, Birmingham. Before the project begins you will also be introduced to either clinical specialist nurses – who specialise in the care of HIV positive people – or Positive Peers – a group of people living with HIV – who will offer a talk of HIV and AIDS to highlight the importance of this project. For more information, visit the events section of the Pride House website.

What’s more, as part of Pride House’s events during the Commonwealth Games, there is a chance to view the UK AIDS Memorial Quilt, an irreplaceable piece of social history which tells the stories of many of those lost in the early days of the HIV AIDS epidemic in the ’80s and ’90s.

Slots are free and available for ten people every hour from July 26 – August 8 at the Southside Building on Hurst Street. To book any remaining slots, visit the Pride House events schedule.