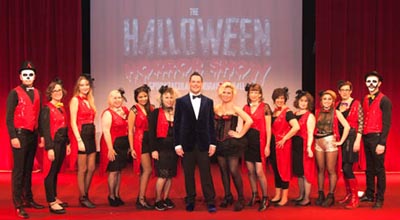 Actor and presenter Christopher Biggins steals the show at the spooktacular fundraising ball, The Halloween Horror Show staged on behalf of The Sussex Beacon.

THE BALL, which took place on Saturday, November 1 at the Brighton Hilton Metropole, included a dinner show version of The Rocky Horror Show with Biggins, who was in the original film, playing the role of narrator.

He was supported by performers from The Brighton Academy who played the roles of Brad, Janet, Columbia, Magenta and the Transylvanians. Frank-N-Furter was played by Barry Lee, previously lead vocalist of the Glee Show, and local performer Jason Lee took the role of Riff Raff. The show opened with a show-stopping performance by girl group The Sundaes as the Usherettes.

Biggins said: “I was absolutely thrilled to host the event and for a cause so close to my heart. We had spectacular fun and it was a night to remember for a very, very long time.”

Well-known Brighton businessman and entrepreneur Robbie Raggio was the auctioneer for the Spooktacular Auction and he helped to raise over £25,000 on the night for The Sussex Beacon – a local charity offering specialist care and support to men, women and families affected by HIV. The final fundraising total is yet to be announced.

The Ball was attended by the Mayor of Brighton and Hove Councillor Brian Fitch, Mayoress Nora Fitch, as well as representatives from local businesses in the city. Many guests enter into the spirit of the evening and took the opportunity to dress up in glamorous Halloween fancy dress which added to the atmosphere on the night.

Simon Dowe, CEO at The Sussex Beacon, said: “At The Sussex Beacon, our services are designed to meet the changing needs of people affected by HIV, helping people to live independent and healthy lives. Each year we have to raise over one million pounds to keep these vital services running and this year The Halloween Horror Show will help us reach our target”.

The Sussex Beacon worked with leading entertainment design agency the E3 Group to produce the Ball. The E3 Group worked on the production of Brighton Pride in 2013.

Dates for next years ‘The Halloween Horror Show’ will be announced soon.

To register interest in attending next year’s event, email:

For more information about The Sussex Beacon, click here: