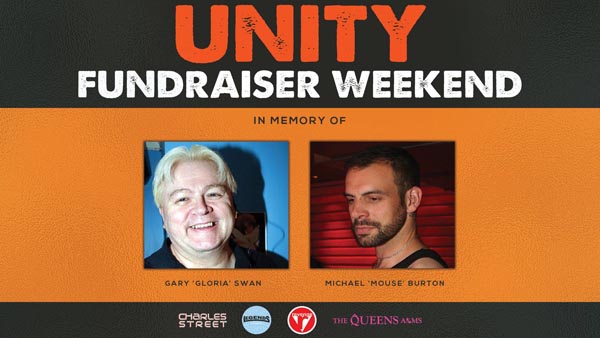 A pair of benches will be named after two popular former employees who worked on the LGBT+ commercial scene for many years, today at 2.30pm in New Steine Gardens in the shadow of the Aids Memorial.

At the end of March some of Brighton’s LGBT+ venues came together to raise money to purchase two memorial benches for Michael ‘Mouse’ Burton and Gary ‘Gloria’ Swan in New Steine Gardens.

Both Michael and Gary who died unexpectedly towards the end of 2016 were very popular on the commercial LGBT+ scene, having worked at different times over the years at Revenge, Bar Revenge, Legends and Charles Street.

A partnership of LGBT+ venues including Revenge, Bar Revenge, Charles Street, Legends and Queens Arms came together at the end of March to stage the Unity Fundraising Weekend, raising a magnificent £2,186.30 to purchase two memorial benches in memory of their two former employees.

Friends and colleagues will raise a glass to remember them and the impact they had on the commercial LGBT+ scene in Brighton and Hove at a dedication ceremony on Sunday, July 23.

Everyone is welcome to attend.