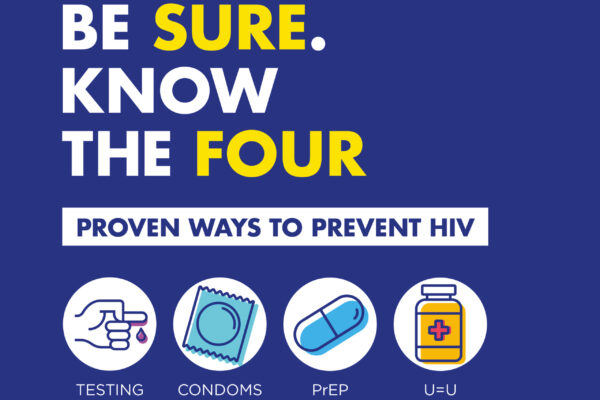 Do It London has launched its latest HIV prevention campaign on behalf of all London boroughs.

The Be Sure. Know the Four campaign will run through the autumn period, including World AIDS Day on December 1, and will end on December 12.

The Do It London campaign, run by London boroughs as part of their collaborative London HIV Prevention Programme (LHPP), seeks to maintain and even accelerate this downturn in new HIV infections. The Be Sure. Know the Four campaign highlights the effectiveness of the four methods of prevention, also known as combination prevention.

The four proven methods of the combination prevention approach are: testing regularly for the virus; using condoms; using the HIV prevention medicine Pre-Exposure Prophylaxis (PrEP); and, for people who have been diagnosed HIV positive, achieving an ‘undetectable’ viral load through the use of antiretroviral medication. The latter safeguards the health of people diagnosed with HIV and has the additional benefit of treatment acting as prevention and eliminating the risk of onwards viral transmission.

Cllr Nesil Caliskan, London Councils’ Executive Member for Health & Care, said: “When boroughs come together and collaborate to tackle key public health challenges, we have been able to see real change across our city. HIV is no exception, which is why we continue to champion HIV prevention through this targeted joint campaign.

“In London we have set ourselves the ambitious task of ending new HIV diagnoses by 2030. London boroughs are committed to this aim and the latest Do It London campaign will contribute to getting us to that milestone.”

Robbie Currie, Lead Commissioner of LHPP, said: “With recent advancements made in HIV prevention – with regard to e-testing, PrEP, and U=U also known as Undetectable – it is crucial that those communities which are disproportionately affected by HIV are informed and understand how they can protect themselves, and their sexual partners, from possible HIV infection.

“This campaign is a timely reminder that, despite new HIV diagnoses going down, we must remain committed in raising awareness that HIV is preventable, that an HIV diagnosis is treatable, and that treatment acts as prevention.”

The campaign, which will run across social media, digital, community radio stations, outdoor advertisement (bus stops, train stations and billboards) amongst others, targets Londoners who are disproportionately affected by HIV including gay, bisexual, and other men who have sex with men (GBMSM) and heterosexual black African communities – in line with the latest HIV epidemiology. The campaign also includes some channels which reach all Londoners to tackle HIV related stigma.