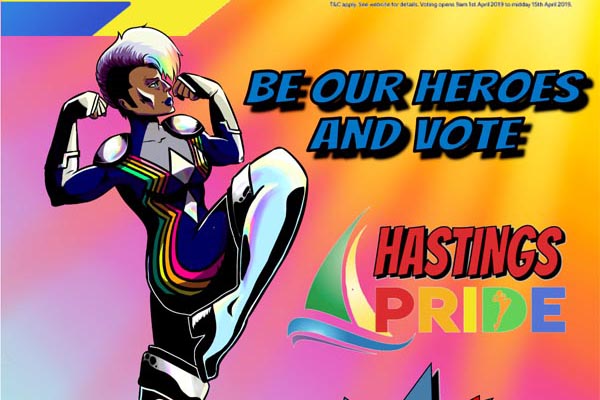 Hastings Pride were invited by the national lottery and ITV to take part in the People’s Project awards.

OUT of hundreds of applications Hastings Pride has reached the final five for the Meridian East ITV region.

Three out of the five finalists can now win up to £50,000 for their community projects which will be decided by a public vote.

Natasha Scott, Arts & Entertainment Director for Hastings Pride said; “We are so thrilled to have this incredibly exciting opportunity. We said after the disaster of last year that we would come back even bigger and even stronger this year. If we can get the support and most importantly the votes, then this amazing opportunity will help us to do exactly just that.”

Last year the festival site had to be abandoned due to the severe weather conditions with the winds getting beyond safety levels and organisers were left with no choice but to close due to public safety. Performers were relocated to bars within the Trinity triangle area at On the Rocks and the Owl and Pussycat who were two of last years sponsors of Hastings Pride.

Natasha went on to say; “If we are successful with the public vote, we will keep Hastings Pride as an outdoor festival, but it will mean that we can keep people safe from the elements by getting a big top marquee that can hold up to 3,000 people. To our knowledge that will mean that Hastings Pride will be the only open-air Pride that is Free to attend but safe from the weather. It means that people won’t have to look out their windows to make a last-minute decision about whether, or not, they will come along to Hastings Pride.

“Hastings Pride is so important as, each year, we see the huge positive impact it is having within our communities in breaking down the social barriers that have caused the most awful damage to people’s life chances, sense of loneliness and mental health, and the overall impact this has on their quality of life and happiness.”

This year’s Hastings Pride is commemorating the 50th anniversary of the Stonewall riots which went on to spark LGBT+ movements all around the world.

Natasha continued: “That’s why we are doing this year’s theme as ‘Heroes’ because they are our heroes for standing up for LGBT+ rights. So please vote for Hastings Pride in the Lottery and ITV People’s Projects and get all your friends, family and even your neighbours to vote for us. Help us become even bigger and better and be our heroes of today and vote for Hastings Pride.”

Voting commences at 9am on April 1 and closes midday on the April 15. ITV Meridian news will be broadcasting about Hastings Pride during the 6 O’ clock news on Wednesday April 3.