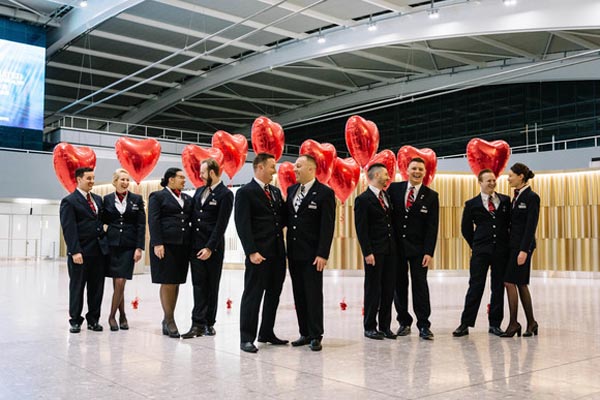 To celebrate Valentine’s Day, British Airways shows that love is really in the air by staffing an entire flight with couples working for the airline.

FIVE cabin crew sweethearts will be flying together on the BA245 from Heathrow to Buenos Aires, and then enjoy a romantic getaway in the Argentinian capital.

For three of the couples it was love at first flight, when they met while working at the airline, with one couple recently going back up the aisle to get married and another celebrating their engagement in December.

Carl and Nathan from Bristol married last November and joined the airline over four years ago.

Carl said: “We’ve been together 13 years – we work well together in every aspect of our lives, so working as colleagues on board is no different. We’re over the (honey)moon to be showing our customers some British Airways love on this very special flight.”

Carl and Nathan have travelled all over the world together and while working for British Airways they’ve visited New York, the Caribbean, Turkey, Spain and Florida.

The airline also played cupid for Aimee and Christopher who live together close to Heathrow Airport. The cabin crew couple got engaged last December.

They’ve flown together on 17 trips and enforce a ‘no plane talk’ rule at home. Their advice to other travelling couples is to stay in “contact as much as possible over FaceTime, stay in the same time zone if possible and remember to make time for each other on your days off.”

Aimee said: “We absolutely love working together and our jobs have afforded us some amazing opportunities – we’ve been on a horseback safari in Johannesburg, to Mardi Gras in New Orleans, to Niagara Falls in Toronto and wine tasting in Santiago!”