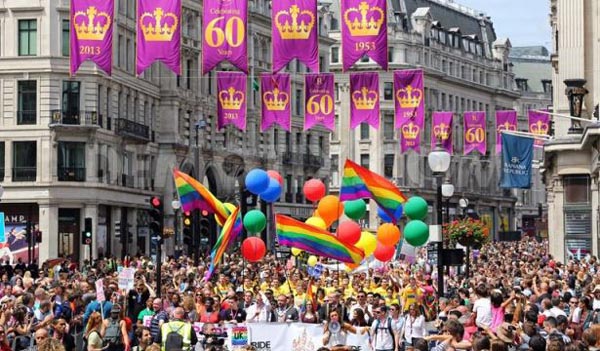 Barclays will once again be the headline sponsor of this year’s Pride in London festival championing the lesbian, gay, bisexual, and transgender (LGBT+) community.

Since 2013 Pride in London has grown in scale and impact, and provides a platform to campaign for extension of LGBT+ rights and acceptance at home and abroad and celebrating the community’s achievements and progress through social media and advertising campaigns, an increasingly diverse Pride Festival of arts, politics and sport and the Parade itself.

Mike Roemer, Barclays’ Global LGBT+ lead and Head of Compliance, said: “Pride in London is a highlight of the LGBT+ calendar in the UK and a key element in our own programme of activities in support of diversity and inclusion in the workplace, and we are delighted to be continuing our support as headline sponsor.

“Our on-going relationship with Pride, both in London and across the UK, is just one of the ways in which we show our commitment to the LGBT+ community.  At Barclays we want our colleagues, customers and clients to feel free to express who they are at all times. We’ve made great strides internally in creating an inclusive global workplace, but we want to go further. By supporting Pride in London, we’re saying “this is who we are” and we want to encourage everyone else to be able to say who they are, without fear.”

Michael Salter-Church MBE, Chair of Pride in London, added: ‘The support of Barclays as our headline sponsor alongside the Mayor of London quite simply makes Pride in London possible. The financial, practical and moral support the team at Barclays provides Team Pride has been crucial to our development as we have worked to put London’s Pride celebrations onto a sustainable footing for the long-term. The wholehearted engagement of everyone at Barclays from the Chief Executive to branch staff has been very powerful and shows what an incredible impact employers can have through supporting their LGBT+ staff in this highly visible way. Coming on board with us in early 2013 was a huge vote of confidence from an internationally known British brand in us as the new organisers of London’s single biggest event and has helped us develop and extend the ways that Pride can serve the LGBT+ community and grow our impact beyond this great city to show London as a beacon to the world.”

Pride in London is a week-long festival taking place from June 10 to 26 and celebrates all aspects of the LGBT+ community. This year’s Parade takes place on Saturday, June 25, alongside entertainment and campaigning in Trafalgar Square and Soho.