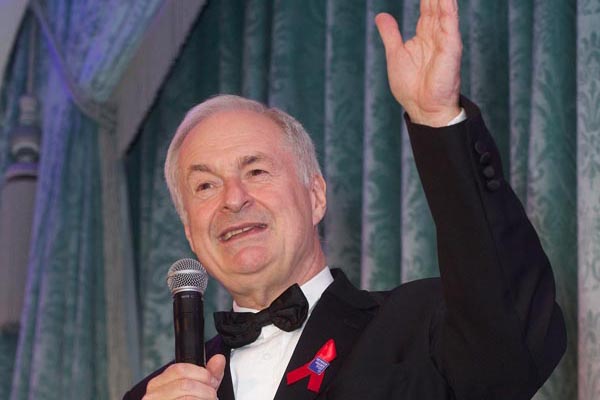 Barclays Spectrum, the bank’s LGBT+ employee network, raised over £130,000 to support HIV charity Terrence Higgins Trust (THT) at its annual fundraising dinner on Friday, October 6 at The Savoy in London.

X Factor and The Voice Finland star Saara Aalto performed at the event, which was hosted by radio and television presenter Paul Gambaccini.

The money raised will support THT’s Work Positive programme, which supports unemployed people living with HIV back to work.

Saara lent her support to the cause, performing hits including her new track, No Fear.

She said: “I’m so happy to be here this evening and to be involved with the Work Positive Programme. Hearing people speak tonight about how the programme has helped them is so inspiring – I want to raise as much as we can tonight to help Terrence Higgins Trust in the amazing work it’s doing!”

One of the highlights of the night was hearing from Rebecca, who was diagnosed with HIV over 20 years ago and found herself unemployed. Before starting Work Positive, Rebecca was one of the quarter of people living with HIV who are currently unemployed.

Rebecca said: “I felt quite helpless and, in my late 50’s, I didn’t think there was much chance of coming off benefits and back into the work place.

“But then I started my internship at THT with Positive Voice, where people living with HIV go into schools and businesses to share their stories and help bust stigma and myths around HIV. Through this project I found my voice which helped me deal with my own stigma around HIV.

“THTs Work Positive Programme, which is run using the funds raised at the Barclays Spectrum dinner, provides work experience, mentoring, and employment coaching to people with HIV who are unemployed, giving them the skills and confidence to help them get back on their feet.

“Today I’m working as a Health Advice Officer,” added Rebecca. “To get this job I had to go through an interview and I was tutored by Work Positive and Ben Tooke, who heads up Positive Voices, on interview skills.

“I feel so much more confident now and the future looks really good.”

Jes Staley, Group CEO of Barclays, who attended the event, said: “Inspiration comes from many places. Barclays is proud to sponsor THT’s Work Positive programme which recognises role models who inspire change, improve culture in the workplace and make inclusion a reality for all.”

Event host Paul Gambaccini said: “My 30-year association with the Terrence Higgins Trust has been one of the most profound relationships of my life.  It was an honour to host this year’s Spectrum Gala. Being in the Savoy is always special, but even more important on this occasion was the chance to raise funds for the Work Positive Programme, which helps unemployed people living with HIV get back to work.”

“Stories like Rebecca’s are incredibly humbling and we want to keep providing this opportunity to other people who want to get back to work and enjoy a fulfilling career, but need support to get there.”