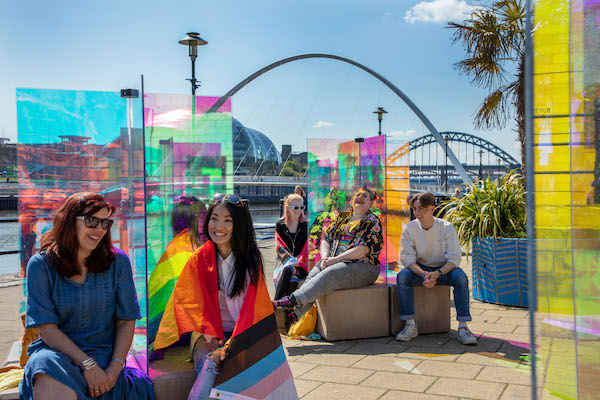 Pride supporters can ‘bank’ on another successful festival in the North East this summer, thanks to the continued support from a top sponsor.

Northern Pride are this year’s hosts of UK Pri de, which will take place at Newcastle’s Town Moor from July 22 – 24. Organisers have more than just a packed programme of events to celebrate this year, with the news that Barclays has returned as festival sponsor.

This is the fourth year that the bank has supported the Northern Pride Festival, including sponsoring its two virtual events during the pandemic.

Ian Twizell, North East Chair, Spectrum, Barclays LGBT+ Employee Resource Group, is confident this year’s festival will be one to remember: “We are thrilled to be supporting UK Pride as festival sponsor this year as part of Barclays’ ongoing support to the LGBTQ+ community.

“Barclays has a strong track record in supporting our LGBTQ+ colleagues and customers and our Pride partnerships are just one of the ways we strive for equality, understanding, respect and inclusivity across the board.

“We have worked with Northern Pride for a number of years now and seen first hand the amazing work it does across the North East and beyond so we are looking forward to another brilliant year for the event.”

This year’s weekend will kick off with a launch party on Friday, July 22, featuring performances from Todrick Hall, Bimini Bon Boulash and Jodie Harsh, with the full weekend line-up to be announced later this week.

Ste Dunn, director of Northern Pride, added: “Barclays has been a huge support to us over the last few years so it is fantastic to have them returning as festival sponsor for UK Pride.

“We have some really exciting plans in place this summer and it’s partnerships like these which really allow us to create the best possible experience for the LGBTQ+ community in the region.

“UK Pride really is shaping up to be one of our best events yet and we’re working with some incredibly talented local performers, alongside our big name acts, to really showcase what the North East has to offer.”