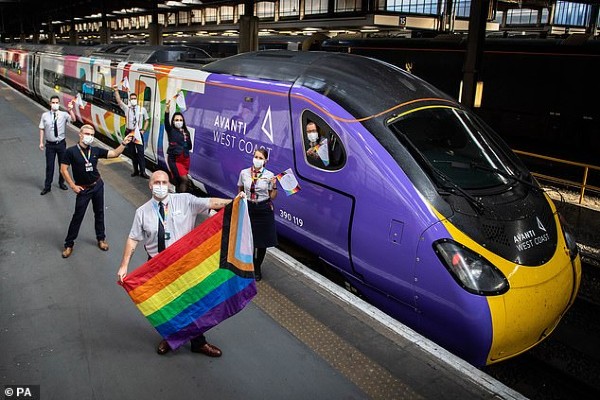 Avanti West Coast’s Pride themed train, which is the first of its kind in the UK, has been titled Progress after railway engineer Edward Hitchon Godfrey submitted the name idea. Avanti tweeted a video of openly bisexual Godfrey explaining the significance of Progress and the importance the Pride train has to him. He said: “Trainbows, Pride Trains and [LGBTQ+ inclusive] events gave me, a closeted bisexual man, the feeling of support within the industry I love, to come out at work, and to challenge prejudiced views. Winning this competition has solidified my sense of belonging and given a real boost to my confidence in my identity.”

He continued: “To me, the name ‘Progress’ embodies both a celebration of where we have got to as an industry and as a society, and a recognition that we’re not there yet – that there’s still work to be done.” Progress made its first journey in August and since then has become part of Avanti’s regular fleet. The company’s executive director, Sarah Copley, said the Pride train was a symbol of the company’s ‘commitment to diversity and inclusion’.

Avanti received backlash from some who believed the train overly highlighted the differences between the LGBTQ+ community and heterosexual/cisgender people, however many praised the ‘amazing’ train. Godfrey said the Pride train was a risk as it was likely Avanti would be accused of ‘do-gooding’ but argued it provided him with the courage to ‘challenge prejudice in the workplace’.