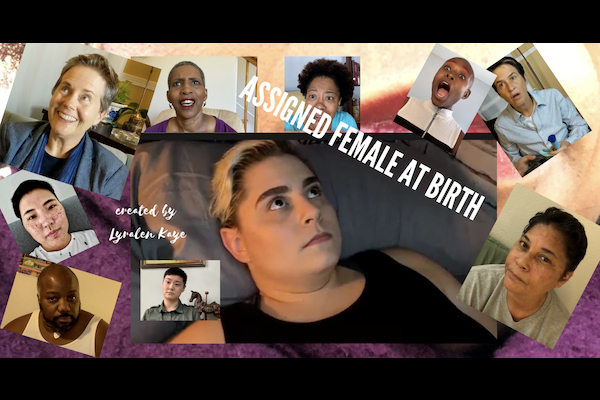 Assigned Female at Birth (AFAB) is the new web-series on YouTube which “weaves the stories, based on 31 interviews with POC, LGBTQ people, trans and non-binary people, people living with disabilities, seniors, cis gendered mothers and daughters”. Created by Lyralen Kaye and filmed in the homes of cast and crew, AFAB is a compelling fictional tale told through documentary style monologues, that address themes of grief, identity, and oppression.

Using Zoom, cast mates’ smartphones, and other clever production tricks, they’ve been able to create a series in lockdown which follows three couples and their immediate family; an a-gender trans man who wants to get married in a dress but their mixed raced lover isn’t on board, a black lesbian who doesn’t like her trans husband’s new penis, and a non binary therapist who’s working to commit to their recovering addict partner.

When approaching the concept of a series about body image, Kaye, as a non binary, gender fluid, pansexual, said “Body is race, gender, identity, age, ability and size…You can’t write about body image in today’s world and not enter the complications of intersectionality.” From there, Kaye began reaching out to queer and PoC individuals to interview, and AFAB began to form a life of its own.

Episode one opens with a line from all cast members stating “What I really want you to know is that when it comes to gender… I don’t play.” Another Country Productions is releasing the first season of six episodes of Assigned Female at Birth on YouTube every two to three weeks.

They are also fundraising to be able to finish those episodes and start on Season 2: Episodes 7-12. You can support them by CLICKING HERE or HERE