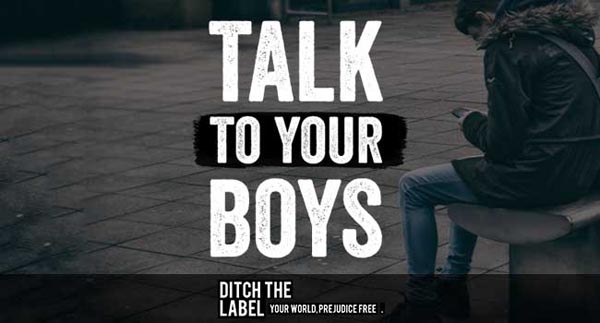 The campaign, aims to encourage young males to discuss their feelings or issues they are experiencing with parents or peers and will highlight how effective communication can be in helping boys navigate issues of bullying, poor self-esteem and mental health issues.

The launch of #TalkToYourBoys is a direct response to Ditch the Label’s Annual Bullying Survey which polled nearly 9,000 young people between the ages of 12 and 20 and found that 1 in 2 boys had been bullied but half of them had never reported it.

Boys are more likely to talk to their parents about exam stress or ambitions for the future than their experience of being bullied.  When asked why they didn’t report it, 1 in 3 said they could deal with it on their own, while 20% were scared of it getting worse and 20% were embarrassed. As a result of the bullying, 32% of young males have experienced depression, 26% have had social anxiety, 19% have had suicidal thoughts and 14% have self-harmed.

In addition, Ditch the Label and social intelligence company Brandwatch evaluated 19 million tweets from the US and the UK over a span of four years in order to better understand the current climate of what it means to be a man, as expressed across social media. The report found that 1 in 3 of all discussions associated with masculine behaviour on Twitter referenced violence and that lack of emotional response and stoicism were also associated as being masculine traits.

Liam Hackett, CEO and founder of the charity said: “Our research consistently finds that young men are under an immense amount of pressure to conform to a set idea of what it means to be a man – ideas which are incredibly toxic and interlinked with violence and stoicism. Men are more likely than anyone else to bully and less likely to talk about the issues affecting them. This is why males are more likely to engage in crime, sexual violence and suicide – because they are discouraged from talking about issues affecting them with comments like ‘stop being a girl’ and ‘man up’. Encouraging openness is a vital step forward if we want to raise a generation of men who are emotionally articulate and able to process stress and trauma in healthy, positive ways. “

Professor Robin Banerjee, Professor of Developmental Psychology at Sussex University, added: “Young men encounter an extensive and often confusing array of messages about what success means, how they should behave towards others, and what is desirable. We also know that a significant proportion of young people have experienced bullying and associated mental health difficulties as they navigate this complex social world. Research shows that the most effective strategies to support young people’s well-being bring everyone together to understand, talk about, and collectively shape the ethos and value system of our institutions and communities.”

The charity has created two new help  one for parents and one for teens looking to help their friends.

Teenage boys may feel more comfortable opening up to somebody they do not know. They can speak to a support mentor via Ditch the Label’s new support platform DitchtheLabel.org/Community or can direct message @DitchtheLabel directly on Twitter to speak to somebody.