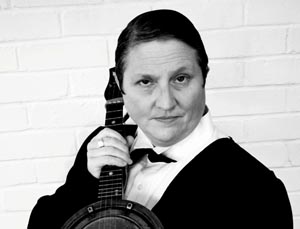 A row has broken out between the LGBTQ student group at Sussex University and two local lesbian artists.

Rose Collis and VG Lee are both popular and highly-respected writers and performers. Rose’s one-woman show, Trouser-Wearing Character has been a national and international hit over the last 18 months, while Lee was shortlisted for Stonewall Writer of the Year in 2012. Both are currently in the running, respectively, for Planet London’s Arts Event of the Year and Author of the Year awards.

Their new show Bah! Humbuggers (or Dyke the Halls) described as an evening of hardly festive fun, words and music plays at the Emporium in Brighton on December 1 and 2 and the Hideaway in London on December 15. The proceeds from the London show are going to benefit the Kids’ City organisation who provide out of school activities for children in Wandworth and Lambeth.

To help publicise the shows the performers posted the event on the Facebook page, Sussex LGBTQ, for the LGBTQ Society at USSU – University of Sussex Students’ Union

Emily Weaver, chair of Sussex LGBTQ group contacted the performers saying: “I am contacting you today as we are going to remove your post regarding Bah Humbuggers on our timeline. We have a safe space policy in place on our page and unfortunately the word ‘Dyke’ violates this policy. As a society we pride ourselves on promoting a safe space which means everyone should be able to participate in a safe environment. We find ourselves in a situation where members of the society felt uncomfortable with having an event posted which included the term Dyke. As a society we are bound to providing a safe space by the student union guidelines and we never take deleting a post lightly however in certain circumstances for example, when we feel safe space is being violated this is a necessary step. We do not have a problem with your event just the word included in the name. We are happy for you to repost your event without the word Dyke if you wish to. I apologise if this causes an inconvenience.”

Rose said: “My first thought was ‘you’ve got to be kidding me’. I’ve been a self-defined out and proud dyke activist for 34 years, marching and campaigning for gay rights before it became a trendy social event. At City Limits, I was the UK’s first-ever journalist hired solely to cover dyke culture and politics. Much of my journalism and books have been about unearthing and celebrating dyke culture and history. And now I’m being told that a word and definition, steeped in our history and reclaimed by lesbian women, is taboo and ‘violates safe space’. It’s staggeringly ignorant, beyond insulting and politically-correct censorship gone mad”.

VG Lee’s added: “As well as being an author, I am also a comedian and would find the email from Sussex LGBTQ hilarious, if it was not so insidious. I am not aware that ‘Dyke’ is a banned word. I realise that there will always be someone who is unhappy with an assigned name. Personally I don’t much like being called a ‘lezzer’ but someone using it wouldn’t pose a threat to me. This appears to be censorship because of personal taste or the view of a few. That is not sufficient reason to ask us to remove the word that I personally cherish!”

Rose continued: “Apparently, according to their Stalinist view of the world and queer politics, no woman is allowed to define herself as a ‘dyke’ – because it makes space ‘unsafe’. Interestingly, they had no problems with the word ‘buggers’.”

“For decades, millions of women around the world have been proud to define themselves as ‘Dykes’. In fact, in several major cities – including San Francisco and London – ‘Dyke Marches’ have been re-born in recent years and proved highly popular, as well as making a political statement.”

Former Gscene columnist, Kate Wildblood, a mature student and fabulous dyke wrote on her blog, Perfect Distractions: “The word dyke isn’t a long lost description of folks like me who find sustenance and sauce in the arms of women. Its a term used everyday. By us queers and, yes, those who have a problem with us. In playgrounds, on school buses, in the street, in life.”

Jayne Roger a Facebook friend of Rose and VG, chipped in saying: “If you are offended by the Dyke word please shove your head back up your arse or vagina, as you please”.

The chair of the LGBTQ group has been asked to comment.

To vote for Rose and VG in the Planet London awards, CLICK HERE:

WHAT: Bah! Humbuggers (Or Dyke the Halls)

To book online and get a 5% discount, CLICK HERE: