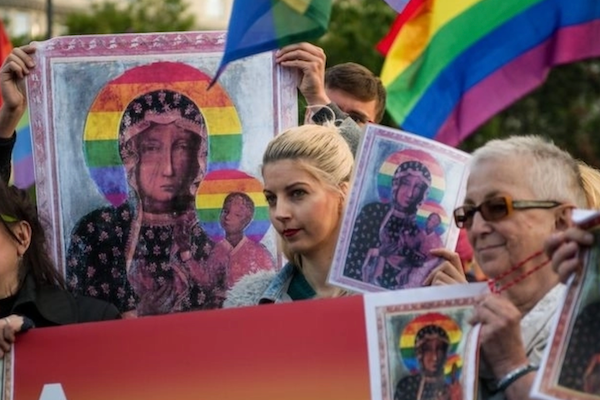 Amnesty International has responded to what it calls a ‘witch-hunt’ against Polish LGBTQ+ activists after ‘Rainbow Halo‘ case.

Responding to today’s dismissal of an appeal against an earlier acquittal of three women human rights activists in Poland who had been charged with “offending religious beliefs” for distributing posters of the Virgin Mary with a halo in the rainbow colours of the LGBTQ+ Pride flag, Catrinel Motoc, Amnesty International’s Senior Europe Campaigner, said: “Today’s decision comes as a huge relief but cannot disguise the fact that these three women should never have been put on trial in the first place.

“Distributing posters of the Virgin Mary wearing a rainbow halo should never be criminalised, so it is right that the appeal against their acquittal was rejected.

“Since the start of the case against them, more than a quarter of a million people have spoken out to demand that the authorities drop the charges in a case that has come to symbolise some of Poland’s most disturbing anti-human rights trends.

“Not only is space for free expression, activism and peaceful protest shrinking, but the climate of homophobia in the country is worsening amid an increase in hate crimes, the introduction of ‘LGBTI-free’ zones by local councils and attempts to ban Pride marches.

“This case has also revealed an ugly seam of state-sponsored homophobia and exposed the way in which Poland’s criminal justice system is being used to target, intimidate and harass human rights defenders simply because of their activism. The Polish authorities must finally end their witch-hunt against these and other activists.”