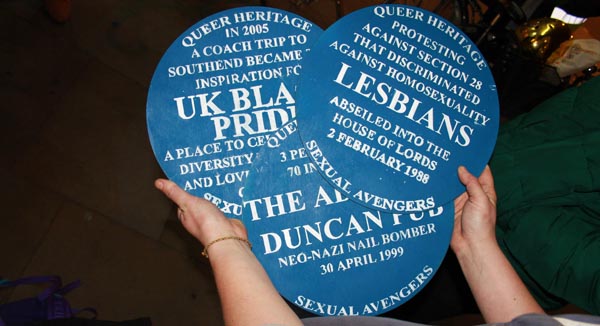 #Yesterqueer direct action is the first action by the Sexual Avengers, a network of campaigns and individuals campaigning for queer rights through direct action and community building.

By fixing up subversive queer versions of the English Heritage’s blue history plaques, the Sexual Avengers intend to bring often-ignored sites of radical queer history into the public eye.

♦ The House of Lords (where lesbian activists abseiled in to protest Section 28),

♦ The Admiral Duncan gay pub (where three people lost their lives to a neo-Nazi nail bomb), and

♦ The home of Black Pride (the UK’s only queer pride event organised by people of colour),

#Yesterqueer draws attention to how radical queer history has been systematically hidden and co-opted to fit a particular, sanitised version of ‘gay’.

Following in the footsteps of the four lesbian activists who descended into the House of Lords on February 2, 1988, four lesbian Sexual Avengers scaled the side of the building in the early hours of yesterday morning (February 22), leaving security guards baffled while presenting a bold reminder of London’s radical queer history.

The action also hit the sites of queer clubs, venues and safe spaces across London. One-third of London’s queer spaces have closed in the past three years, as property developers, absentee owners and gentrification drive queer people not only out of their bars and clubs but even out of their homes. One in four homeless youth in London identify as LGBT+, and this number is rising. See below for a full list of sites.

Through #Yesterqueer, Sexual Avengers are demanding a permanent home in London for radical queer history. This is the first action in an ongoing campaign to put queer activism and the personal stories of queer people back on the map, from Whitehall to the back alleys of Soho.

Sexual Avenger Lucy Warin, said: “For us, the personal is political. I’ve grown up queer in a straight world that tells me I’m allowed to be gay, but not ‘too gay’. As a community we don’t get to celebrate our personal history much – straight people can’t identify the place they ‘come out’, they didn’t lose their virginity ‘in the closet’ and they probably can’t name one of the multiple places on public transport where I’ve lowered my voice or degendered my partner when telling a friend about a relationship. There should be no shame attached to these sites. We have to uncover our history to celebrate and learn from it.”

Sexual Avenger Ariana Jordão, 33, who attached the plaque to the House of Lords, added: “We did this to celebrate collective acts of queer resistance. The House of Lords represents the powerful who ignore the interests of the few, so this is about visibility, creating something that’s impossible to ignore – a rupture in the impenetrable powerhouse. It felt awesome standing on the shoulders of giants, and of my friends.” Ariana is a biologist, artist and gardener.

Sexual Avenger Tabitha Quirke, said: “One-third of London’s queer spaces have closed in the past three years, and queer homelessness is rocketing up. The threat to our identity and lives is growing, as capitalist investors force the closure of our bars, clubs and community spaces. Queer spaces have saved lives: now someone needs to save them.”

Sexual Avenger Dan Glass, concluded: “Radical queer history is full of hope, full of hard-fought campaigns by committed groups and individuals that have won us the rights we now enjoy today. London is unique as a ‘gay friendly’ city with no permanent LGBT+ museum or cultural space: comparable cities such as Berlin, San Francisco or New York all have such a space. We demand a queer cultural space to understand where we’ve come from, and how far we still have to go to achieve equality, especially for the most vulnerable members of our community.”