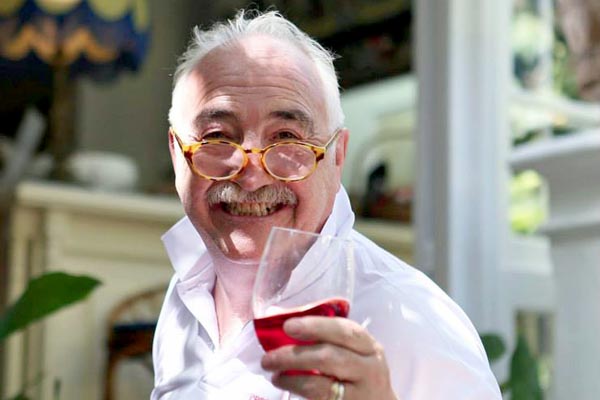 Brian Butler talks to Brandon Jones about his unique film about the history of the gay Spanish Mecca of Sitges.

BRANDON Jones first went to Sitges in 1981, buying his house there in 1985. In 1989 Brandon and his partner Juan were appointed as the representatives for BBC SPORT, to help in putting together the infrastructure for the 1992 Barcelona Olympics, but he is best known locally for being the co-owner of Casablanca cocktail bar and art venues or the last 20 years.

“About 7 years ago I started to research the gay origins of Sitges from members of the LGBT communities here,” he said. With local sponsorship and crowd funding he released the film earlier this summer to wide acclaim in the town.

He has pieced together a fascinating insight into how a sleepy fishing village just south of Barcelona, with an original population in 1900 of 3,500 has now grown into a bustling internationally well respected gay resort.

“In the dark days of Franco’s dictatorship Sitges became an almost secret haven for gays who felt safe here although they still had to behave discreetly”,  he adds.

Apart from a dark period in the late 1990s when homophobic demonstrations left a local barman in a coma, Sitges has triumphed as a liberated, tolerant and diverse community.

Surprising then that the first LGBT association began in only 2001. The theory is that until recently most gay visitors were just that – visitors for a few days or weeks. But with a notable number of gay people buying properties and paying taxes, it was inevitable social action groups would be formed, as Brandon did in 2011 as co-founder of Gay Sitges Link.

And Sitges has always managed to avoid becoming a gay ghetto, the film tells us, and the newly formed associations are committed to integration within the wider community, while supporting events like World Aids Day.

And the film makes it clear that it’s always been easier to be gay in Sitges than elsewhere in Catalunya.

So who are the main players in Sitges gay development ?

Santiago Rusinol was a poet, playwright and painter who in the late 1880s left Barcelona and his wife and young child to go to in Paris with the painter Ramón Casas. Rescued by his wife from a morphine and absinthe detoxication clinic in Paris, Rusiñol returned to Barcelona and later discovered and moved to Sitges, attracted by its quality of light and the famous white-washed walls of its buildings.

Brandon explains: “His Bohemian, homo and bi friends joined him, as did the likes of Diaghilev, the ballet entrepreneur and his gay lover the dancer Nijinsky, composer de Falla, playwright Lorca and painter Salvador Dali, all of whom  helped to transform the fishing village into a Bohemian artists’ retreat- a tradition which remains today.

The Barcelona bourgeoisie-who had gay sons began to send them away out of that city’s eyes and set them up in Sitges, and they in turn attracted their friends to the resort.

Film stars began to visit and reside there and films were located there. Today there is a major International Film Festival which this year marks its 50th birthday.

In the 1930’s and 40’s there were no gay bars – just bars full of men, who had to be careful because despite its libertarianism, Sitges had a repressive and cruel police force.

Antonio Amaya, an international singing star was the first to open a ‘gay’ club, but of course gay didn’t exist as a term.

Brandon says: “he put Sitges on the map. Carnival which was banned by Franco was allowed to exist in Sitges, though only indoors, in bars where men dressed up, but not on the streets “.

Nowadays a whole series of festivals and events are spread across the year. The 17-year-old Bears week now attracts over 3000 visitors who spend some 3 million Euros in the town in just 7 days.

Luis Enriquez, who owns or has an interest in 17 gay bars and venues, is also Chairman of the association which organises Gay Sitges Pride – first held in 2011. Some feel it’s not as political as Barcelona Pride – more of a party – but others in Brandon’s film feel Sitges has now moved on to be much more socially aware.

Gay Sitges Link tackles homophobia and violence against gays in the town and organises a Cultural Pride as well as producing an annual magazine, Vision.

Nowadays, says Brandon, there are over 40 places under gay ownership – a huge number for the size of the town.

It’s current gay mayor, Miquel Forn, says Sitges is a place where co-existence, tolerance and inclusivity are a reality.

Brandon’s film is available for overseas purchase via thegayhistoryofsitges@gmail.com