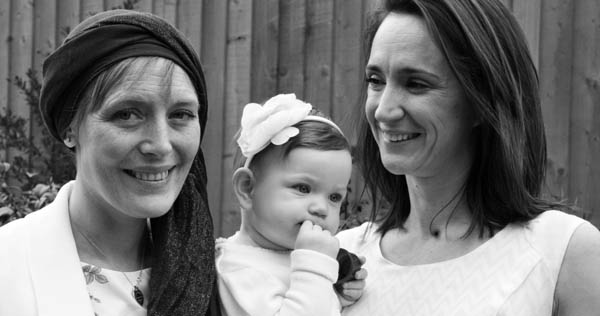 A fund set up to save the life of a Mum with terminal cancer has topped £16,000 in donations just days since it was launched.

Their next fundraising event Karaoke For Charley, will be at The Bedford Tavern on Tuesday, August 2 from 7pm-10pm.

In January 2016, Charley Ashton, 34, a local businesswoman from Hove was told she had a rare and aggressive form of cancer and only weeks to live.

The cancer was eating its way through her vital organs, with more tumours popping up rapidly in her stomach, liver and peritoneum.

Since then she has been fighting daily to allow herself more time with her wife Jess and their 18-month-old daughter Aurelia, while the terminal prognosis remains ever-present.

In February, the doctors allowed her a course of chemotherapy and to date she has endured six rounds. The chemotherapy prescribed is so aggressive that she will only be able to have one more round due to the effects on her heart. But, although it made her really sick, the chemo had made the main tumour start to shrink.

The doctors believed this would only be temporary and the cancer would get clever and start to grow again.

With the chemotherapy coming to an end, Charley is desperate to try immunotherapy as her last chance.

Reports about this groundbreaking treatment have flooded the media in recent months with many believing that it could be the cure for cancer that the world has been waiting for.

But, because it’s still in the trial stages, immunotherapy is only available on the NHS for melanoma sufferers so far. Anyone stepping forward to try the lifesaving treatment has to foot the £100,000 bill.

While Charley fights the biggest battle of her life, her friends and family have set up a fund to help pay for the cost of the groundbreaking treatment which has been hailed as the potential cure.

A series of events will be taking place over the next few months to raise the money needed and already more than £16,000 has been raised since the page was launched last week.

Charley said: “I am overwhelmed by the kind, kind donations and words of encouragement from everyone who has donated so far. It’s totally blown me away and I can’t stop crying! It really has given me the added strength to keep going on.

“I’ve got a scan on July 22 and if the tumour has shrunk again, then I will be offered one more round of chemo and that will be it for the chemotherapy. It’s left me wondering what next. Sometimes it just seems as though immunotherapy is going to be my only hope of seeing my daughter grow up”.

To find out more about Charley, Aurelia and Jess, click here:

To make a donation to help Charley, click here: